Burning Man Wedding Invites – We have been dying to get this blog posted ever since we started this project earlier this year. Julie & Vincent, a super cool couple from Maryland, USA, got in touch with Wedfest looking for us to design and make them some wedding invitations for their wedding which would be taking place at the Burning Man Festival 2015. 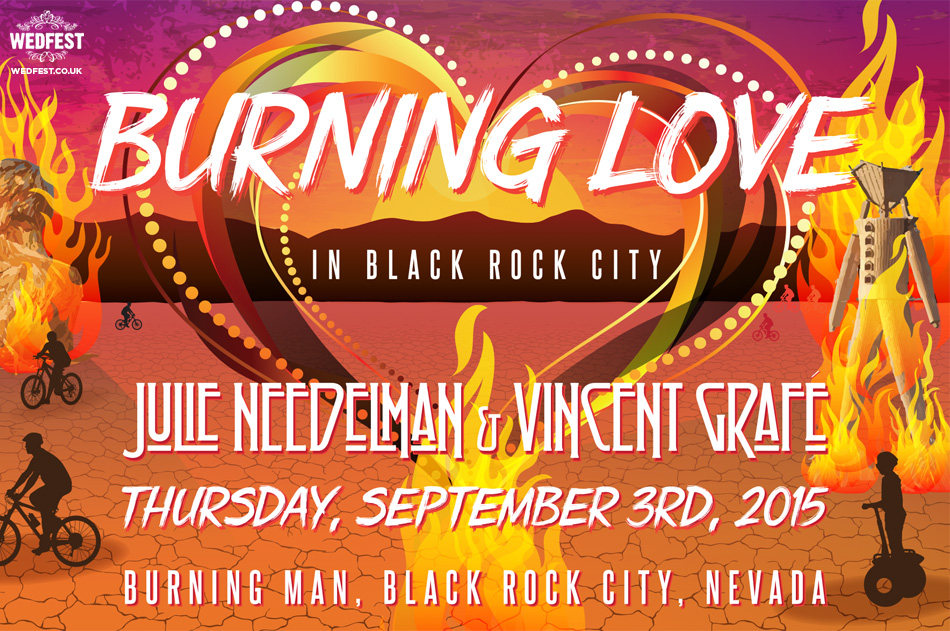 The Burning Man Festival is a yearly festival which takes place at Black Rock City, Nevada. Basically it takes place in Black Rock Dessert and Black Rock City is a temporary city constructed for and during the festival itself. Once the festival is over the City is take down and the dessert is left exactly as it was before it began. The festival itself is described as an experiment in community and art. The festival is guided by 10 principles or guidlines that the festival attendees, known as Burners, are encouraged to adhere to such as radical inclusion, gifting, radical self-expression, communal effort, participation, and leaving no trace amongst others. The festival itself does not have a single focus but to the wider world looking in it would probably be most widely know for its Art and Art installations which are built upon the Playa, also its vast array of ‘Mutant vehicles’, basically all the craziest types of cars and vehicles you can think of, imagine Wacky Races meets Mad Max Beyond Thunderdome and your still not there. 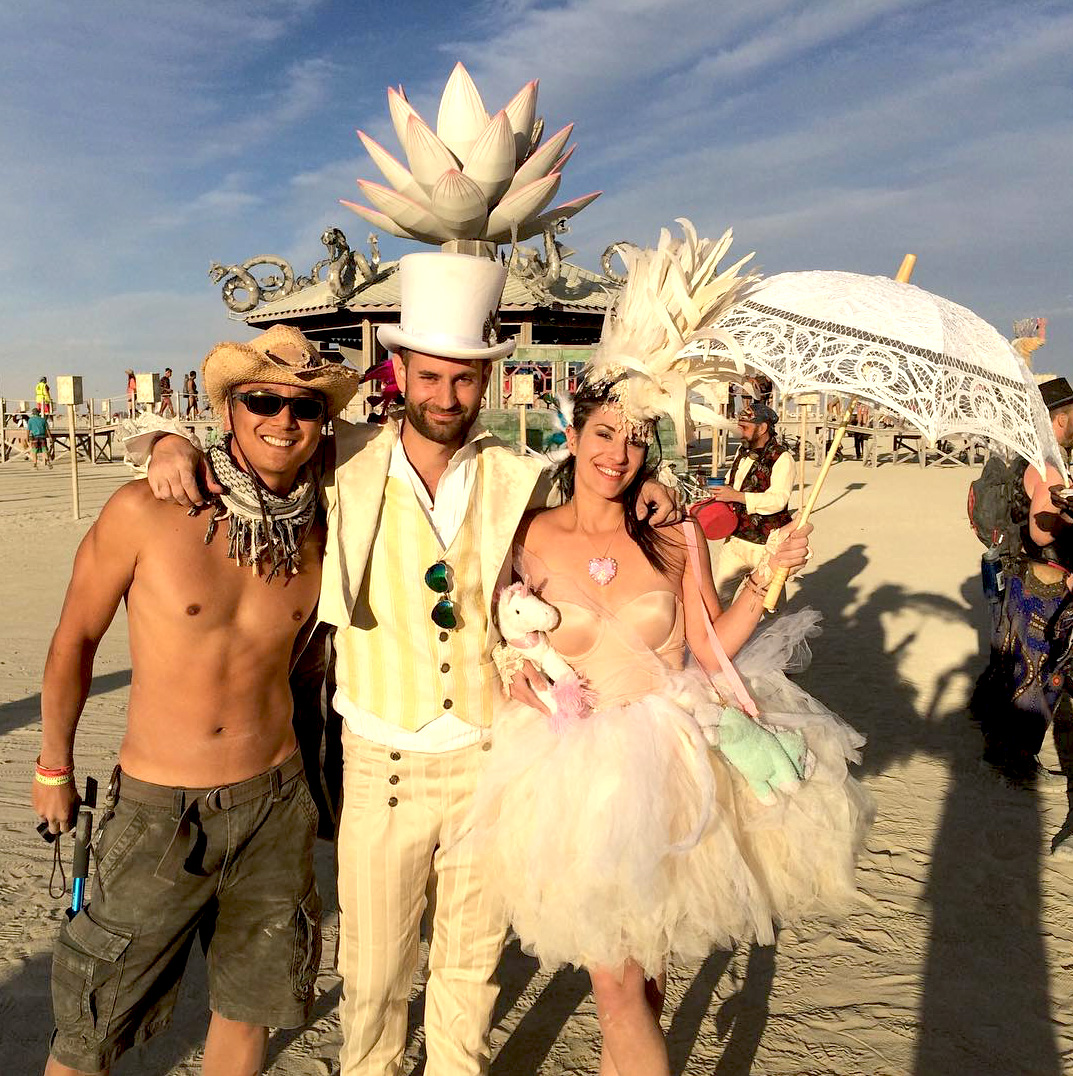 Julie & Vincent with another Burner after their Burning Man Wedding

It would also be famous for its bikes which the ‘Burners’ also use for getting around the site when not on one of the many art cars driving around. One of the most famous features of the festival is ‘The Temple’ and ‘The Man’. Both The Temple and The Man are iconic symbols of the Burning Man festival and the tradition is that both of these are burned towards the end of the festival, hence The Burning Man. Of course there is also music which is a large part of the festival but there much, much, much more going on so we suggest you go google it and you will be reading about it for days on end. 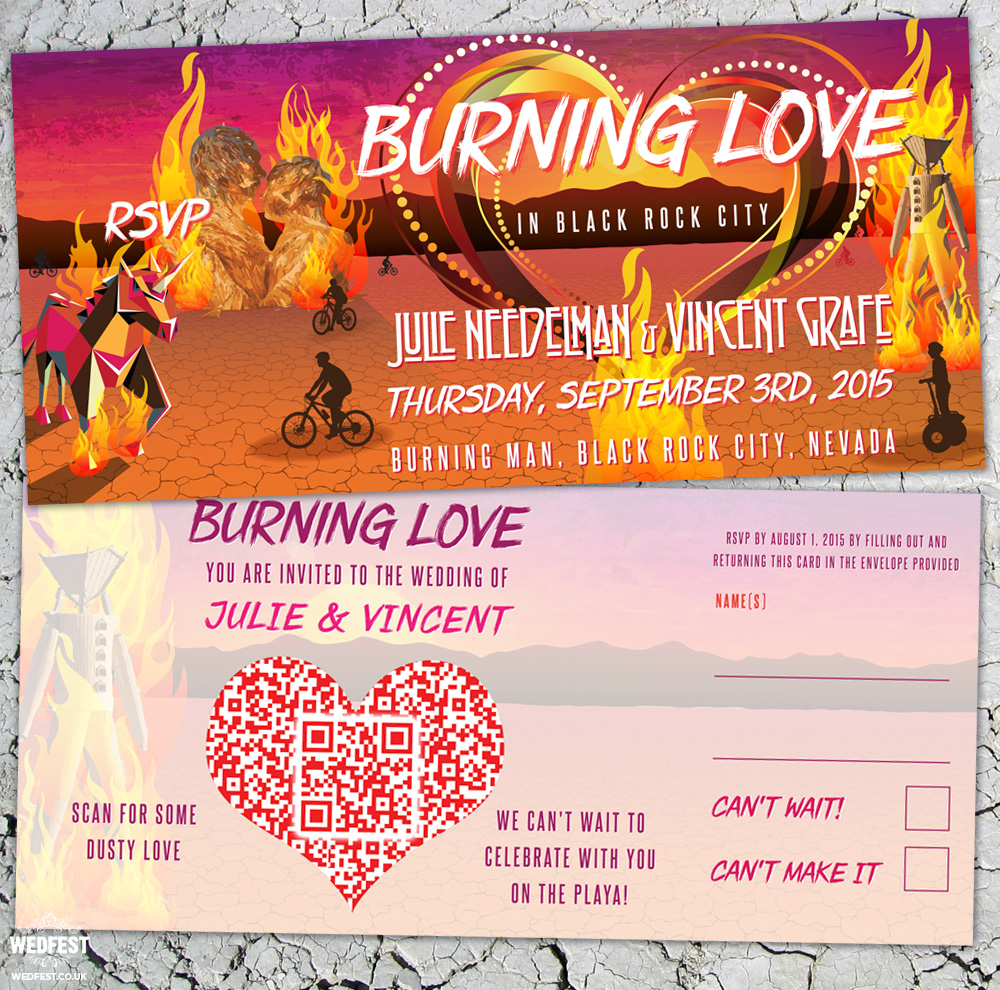 But back to the two Burners who got in touch with us. Julie and Vincent wanted their Burning Man Wedding Invites to capture the essence of the festival in the design of the invitations. They wanted to name the wedding ‘Burning Love in Black Rock City’, and it couldn’t be more perfect. 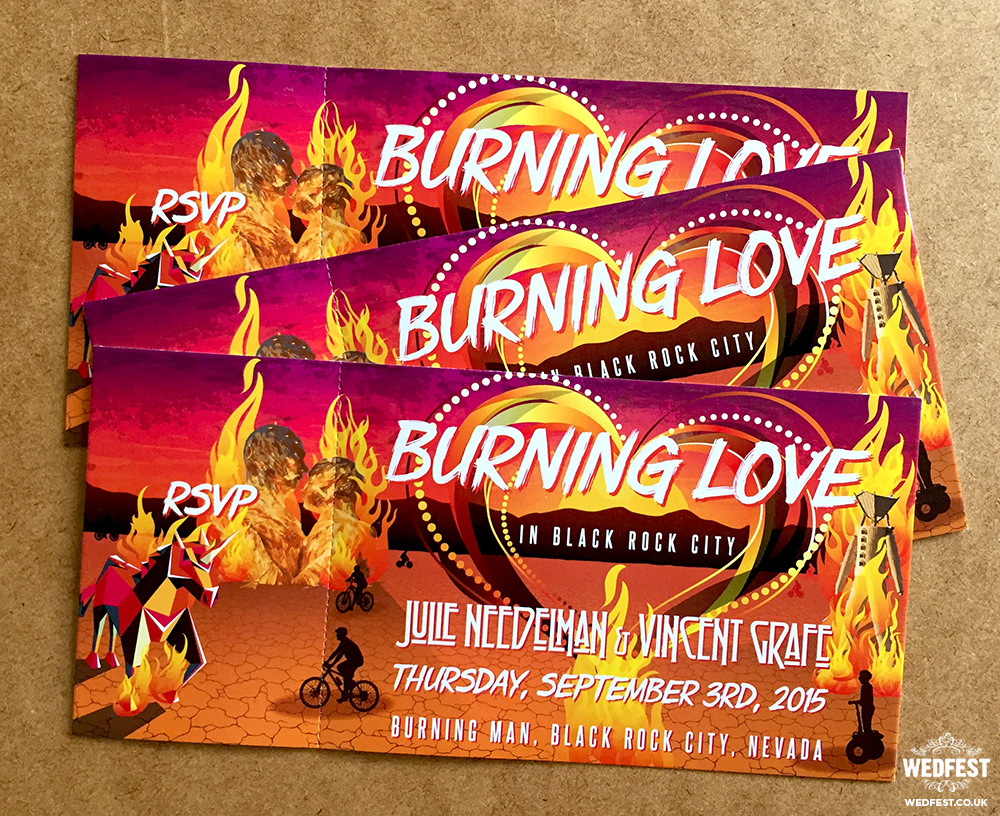 For the design we researched loads of photos of the Burning Man Festival and the Playa to gain some inspiration. Although its generally a dusty and quite grey area we wanted to bring the design to life so focused out attention to the colours of fire and love and worked this into a sunset scene, with the sun setting over the mountains in Black Rock Dessert and the Playa coming into the foreground being the focus of the design.

As bikes are so common in nearly every photo of burning man you see these had to be included. We wanted to include some of the large art installations found on the playa so added a few of these in, most notably THE MAN itself, and added flames to all of these sculptures to create the idea that they were on fire. And as there is all sorts of crazy goings on we also added in a flaming Unicorn just for good measure! The design turned out pretty sweet and the colours were really warm and vibrant, hopefully capturing the spirit of the festival in some way. 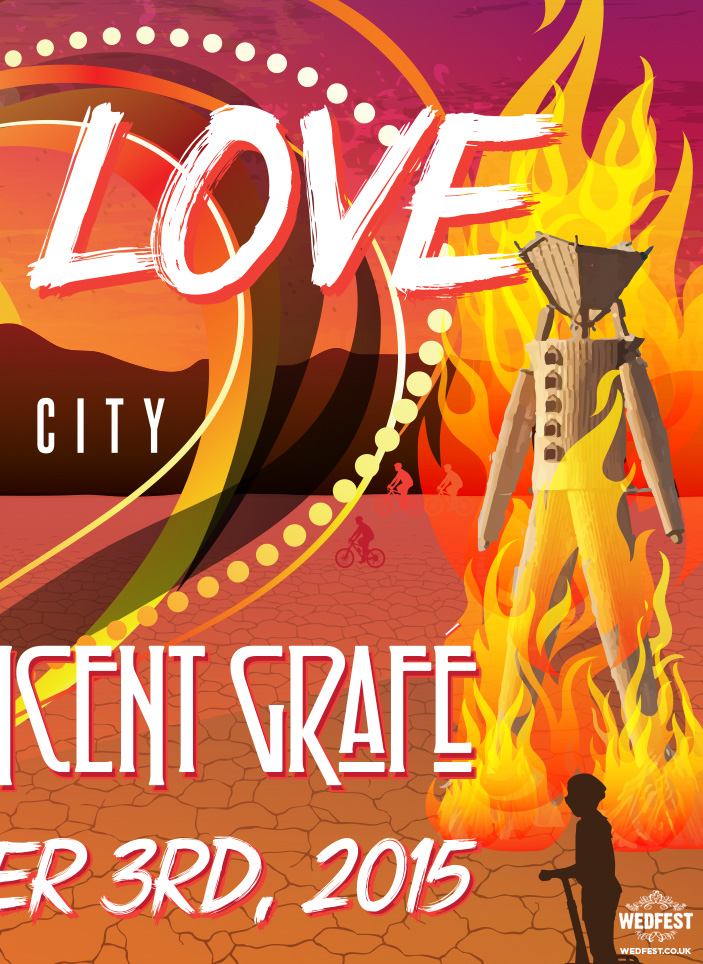 The reverse side of the wedding invite had further information on the wedding and had a large heart shaped QR code that the wedding guests could easily scan and be redirected to the couples wedding website. The invites were made in a ticket style so that the ticket stub was doubling as an RSVP card that could be easily filled in and returned to the couple. 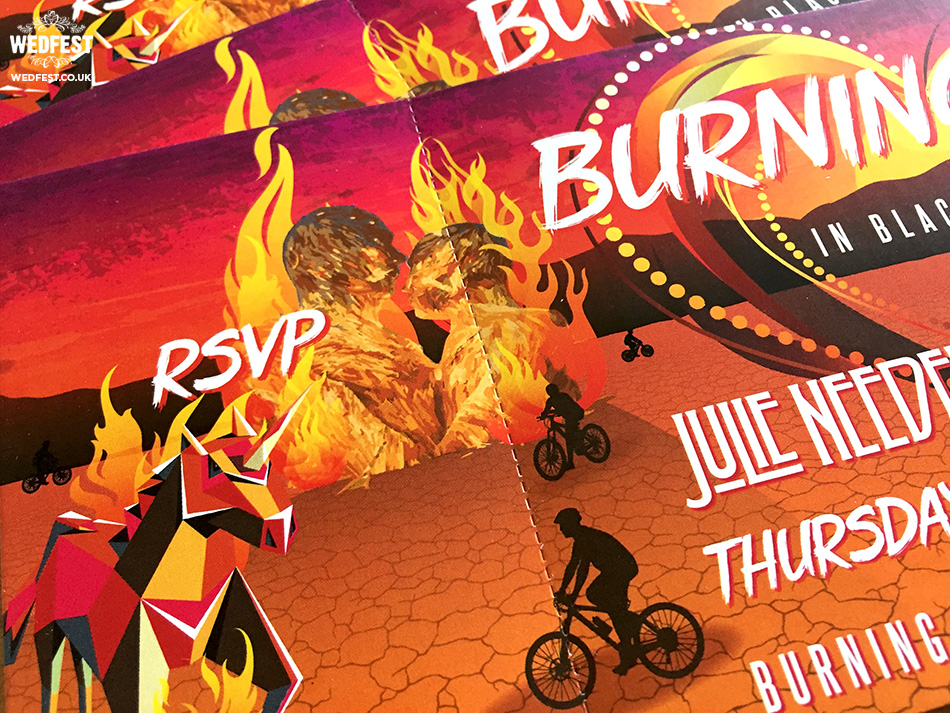 Julie and Vince were very kind to share some of their Burning Man wedding photos with us and allow us to post them on the website to give you all an insight to how amazing a Burning Man Wedding looks. We should have pointed out earlier that another huge feature of the festival is crazy dressing, costumes, or basically little to no clothes if thats what you are into. 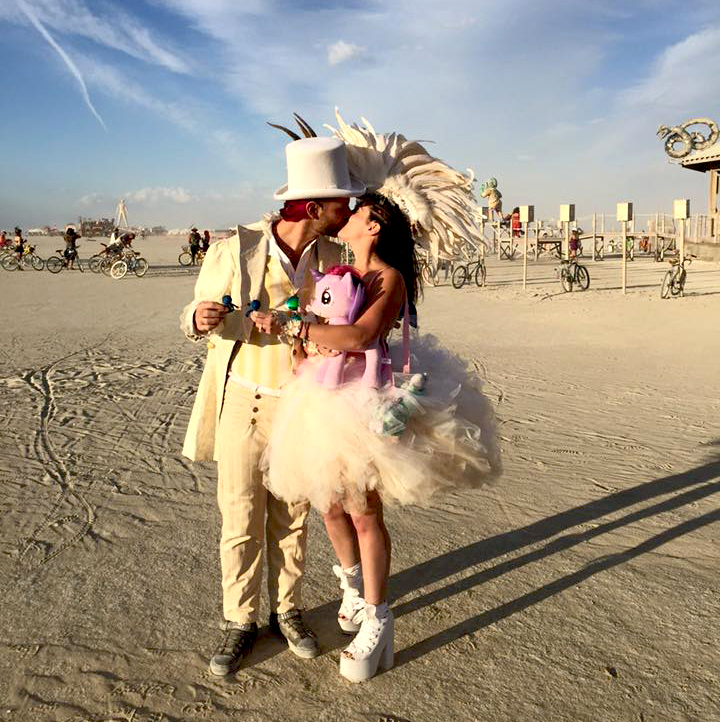 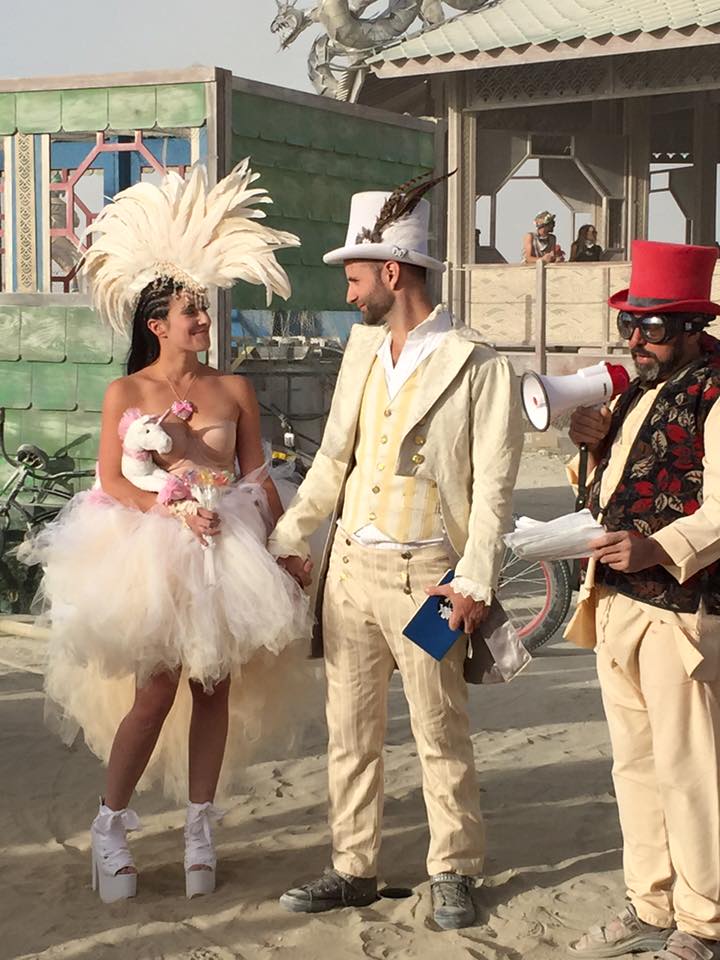 Julie & Vincent’s wedding outfits are totally amazing and they clearly put alot of thought and effort into them. The head pieces especially are unreal and all the small details are excellent such as the lollipop bouquet the Burning Man Bride is holding. Plus Vincent’s suit is the bomb!! 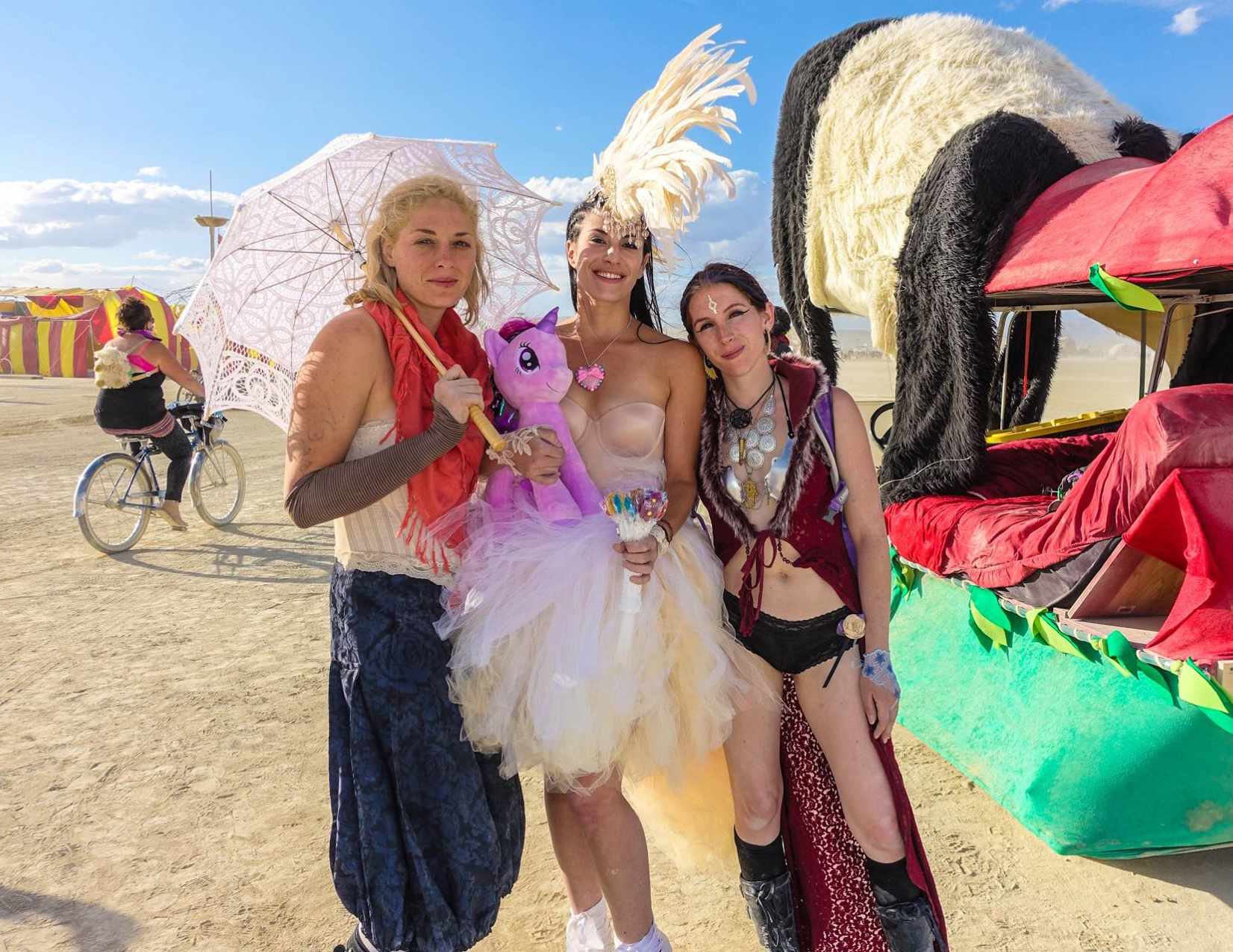 We would like to thank the guys for sharing the photos and wish them every happiness for their future together. No doubt they will be Burning for a long time to come. 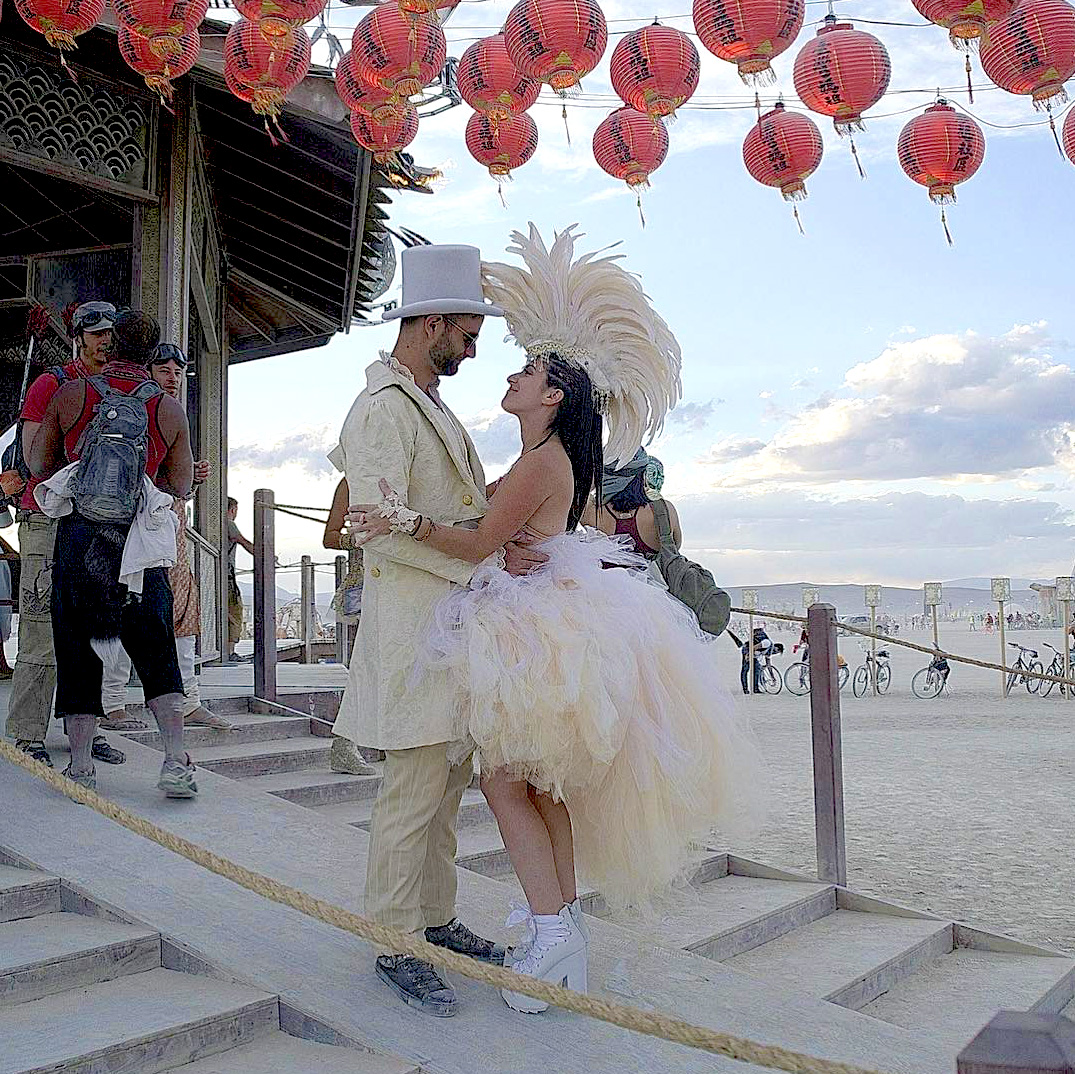 If you are planning to get married at Burning Man and would like some awesome wedding invites or wedding stationery, or you just want to have burning man themed wedding invites, please click here to get in touch and see what awesome designs we can create for you!