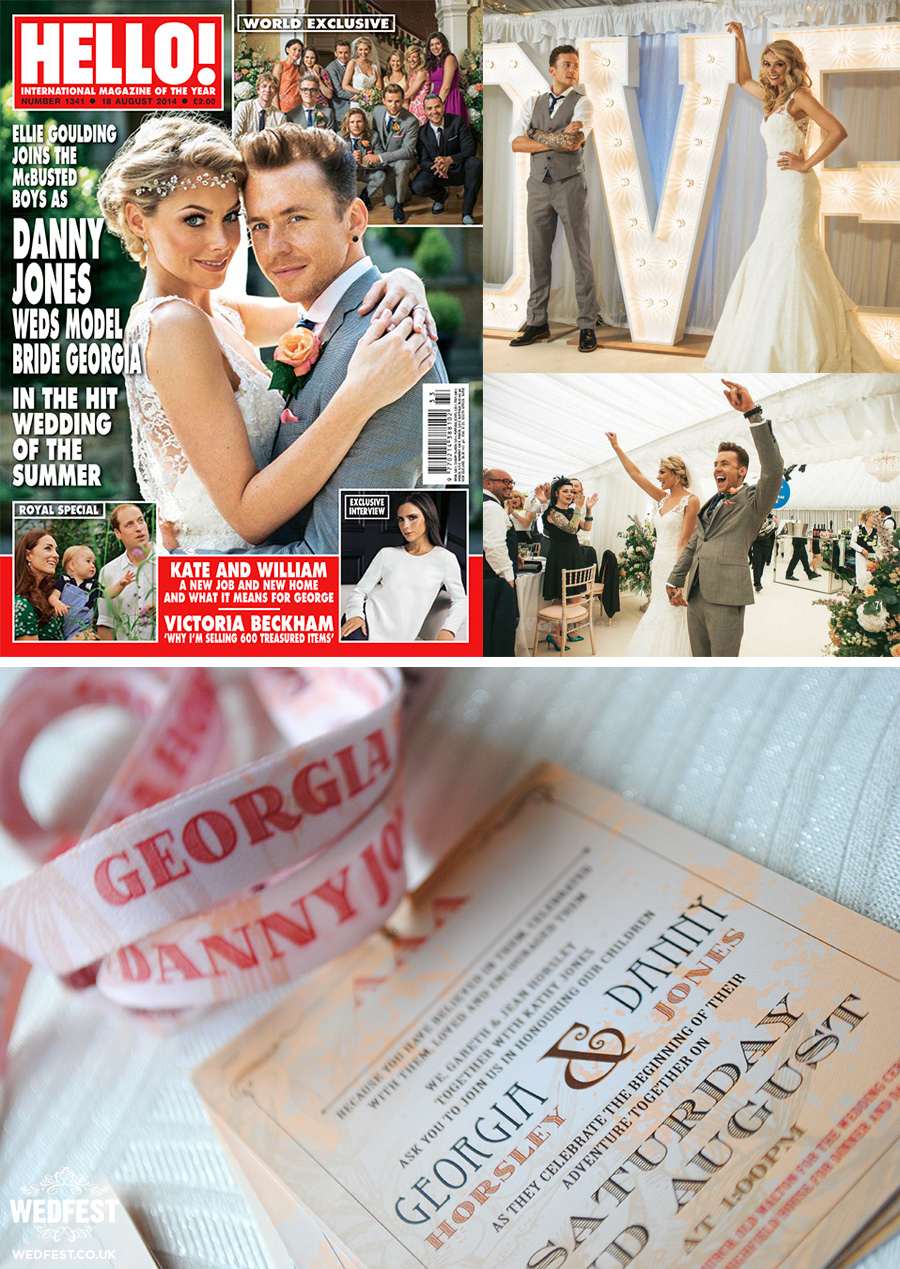 The wedding itself was a star studded event not only featuring the famous couple themselves but also included guests such as The McBusted boys Tom Fletcher, Dougie Poynter, Harry Judd, James Bourne, Matt Willis and his wife Emma Willis, pop princess Ellie Goulding and many more. 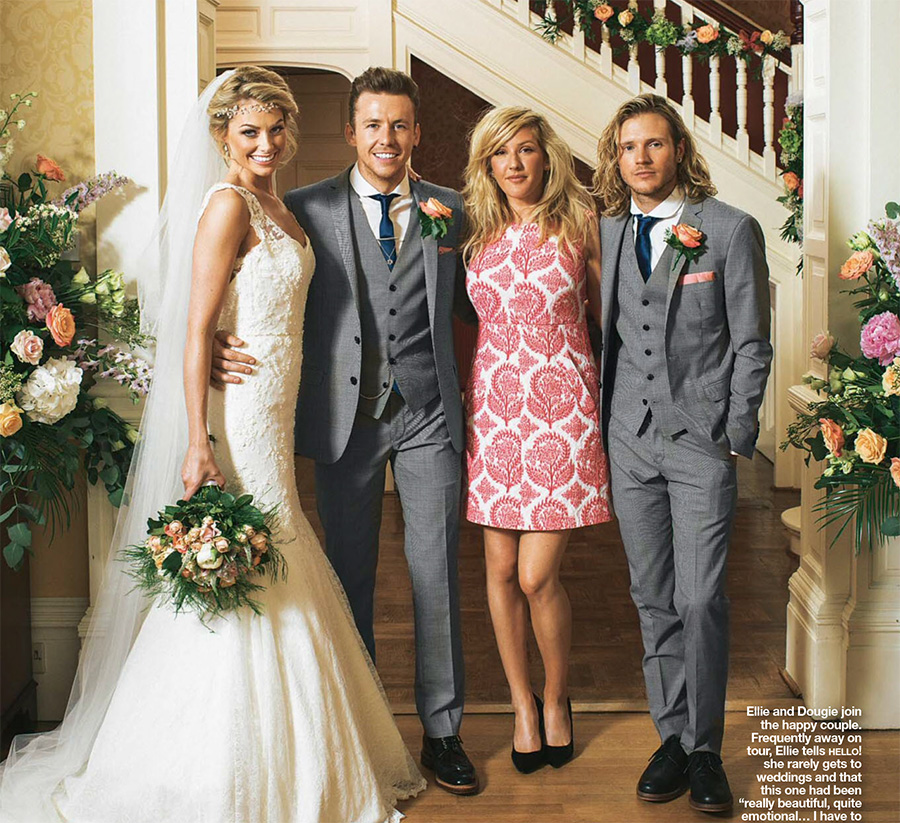 Georgia had got in touch last summer after seeing some of our festival and concert themed wedding stationery and was looking for something similar, and since her husband to be is playing to 10-20,000 people every night a nod to this in their wedding stationery made perfect sense. 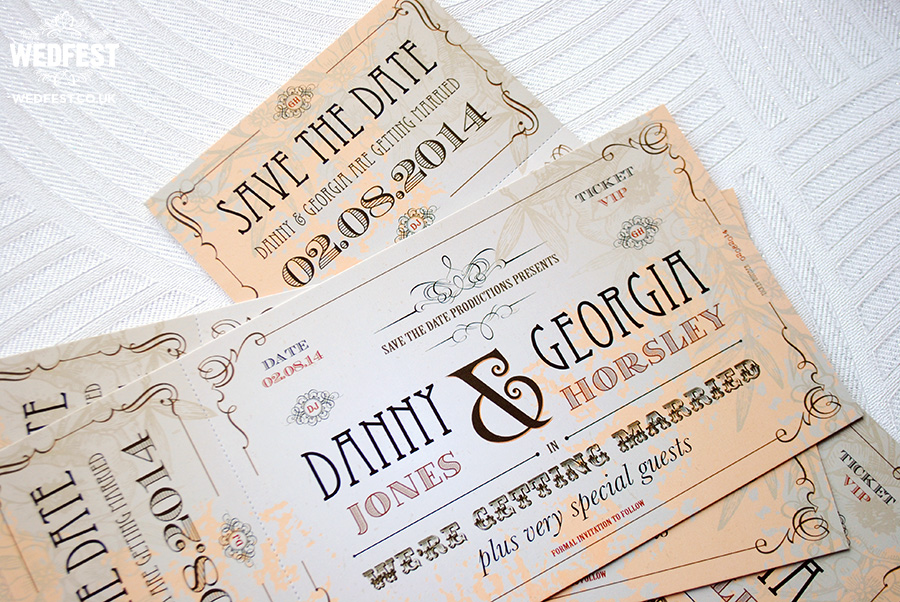 The first thing we worked on was the wedding save the date cards. We made these in the style of a vintage concert ticket with the headlining acts of course being the bride and groom to be. The save the date tickets featured little details such as the ticket number being the wedding date and mentioned that the wedding would feature very special guests, and that it most certainly did.

Next up was the wedding invitations and these were made up in the style of a backstage access all areas pass / festival lanyard programmes. The lanyard invitations featured 8 pages in total made up from 4 lanyard cards and were attached to a beautiful personalised printed neck lanyard which featured the couples names and wedding date. The design of the invitations followed the same vintage design we had originally worked on in the save the date cards. 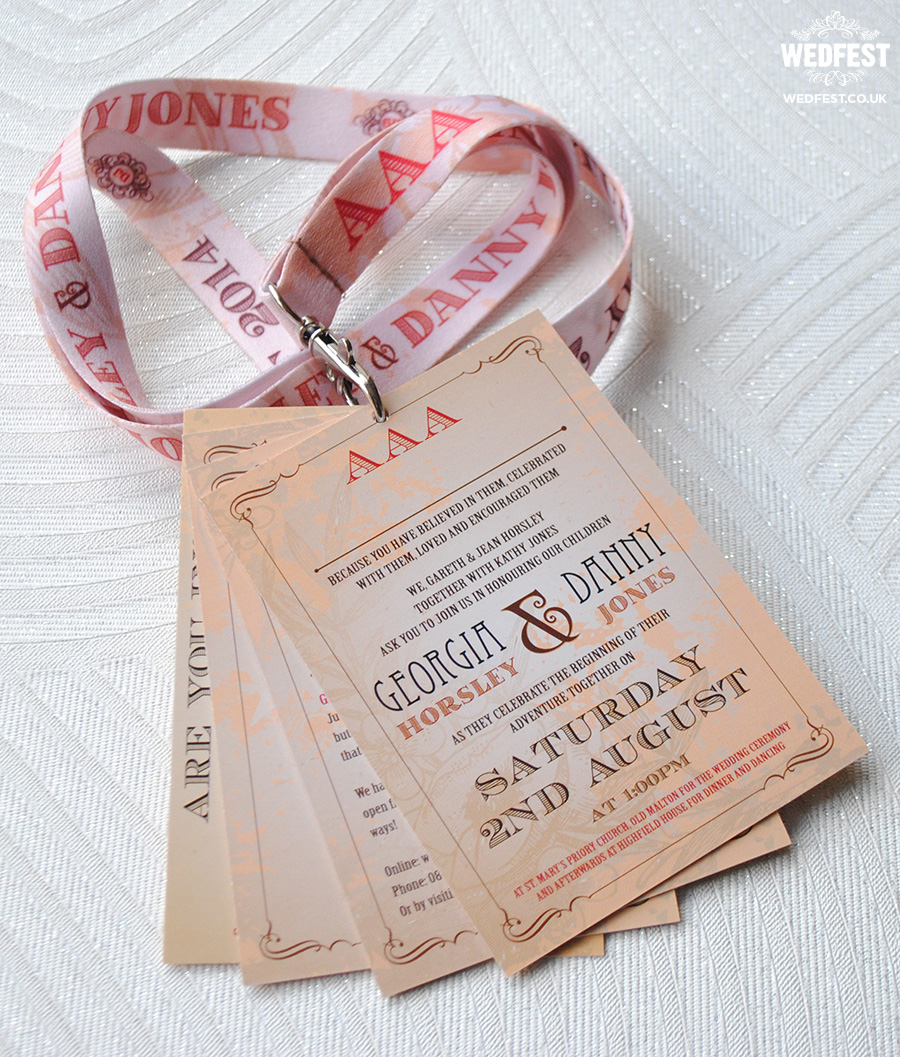 The first page of the lanyard invites was the actual wedding invitation itself which featured the invitation text, names, wedding date, time and venues and an area for the guest names to be written right at the very top just below the large AAA (Acess All Areas) text. Page 2 featured a map of the area and outline directions and information for wedding guests travelling from St. Mary’s Priory Church, Old Malton to the wedding reception venue. 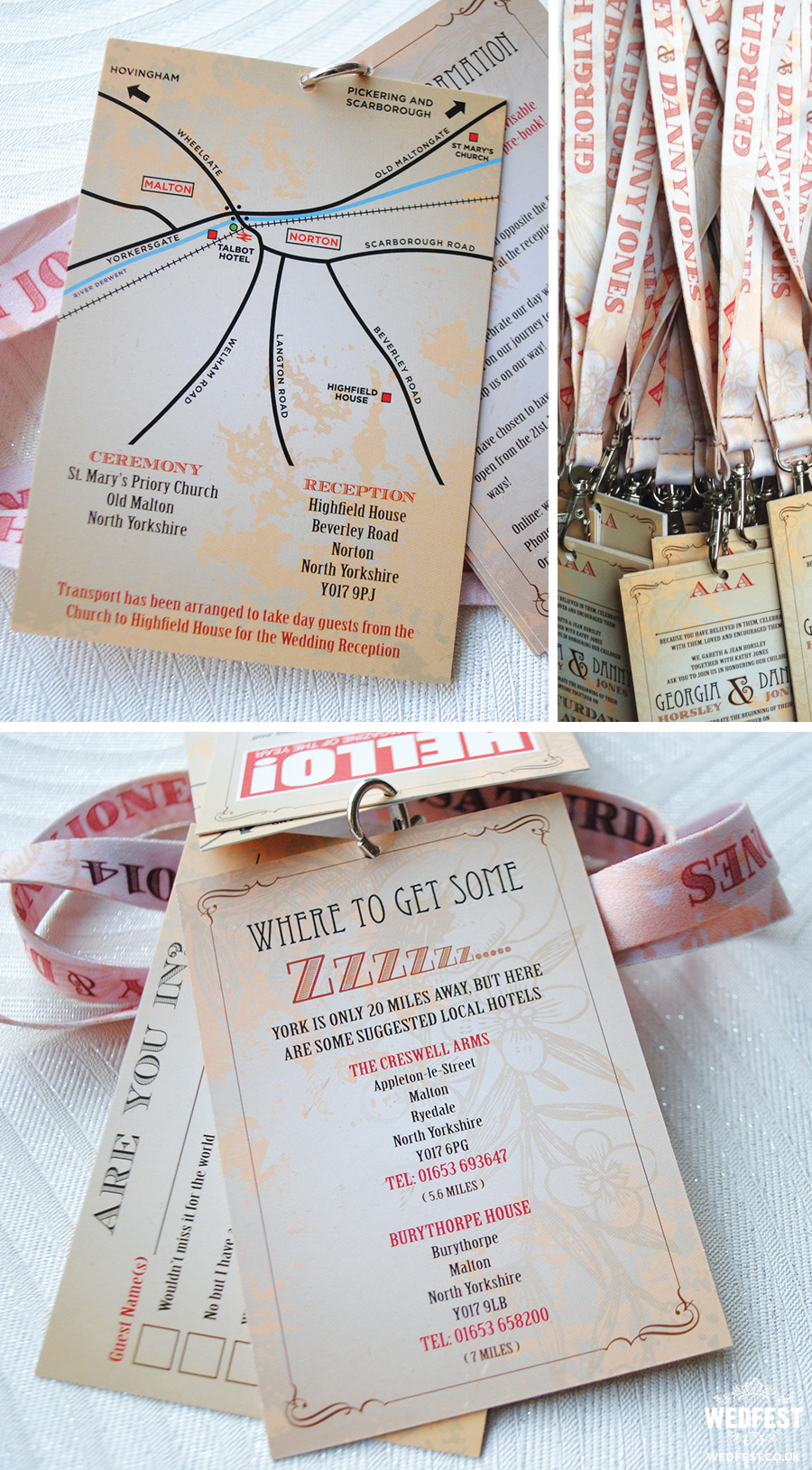 The next few pages featured some general information on hotels, local taxi numbers and parking etc. and details of their exclusive deal with Hello! Magazine. The final card on the lanyard invitations was the wedding RSVP card which gave guests the opportunity to let the couple know if the could attend or not, what food choices they would like and what songs they would like to hear at the wedding, you can be sure there would be a few McFly & McBusted classics in there!! 🙂 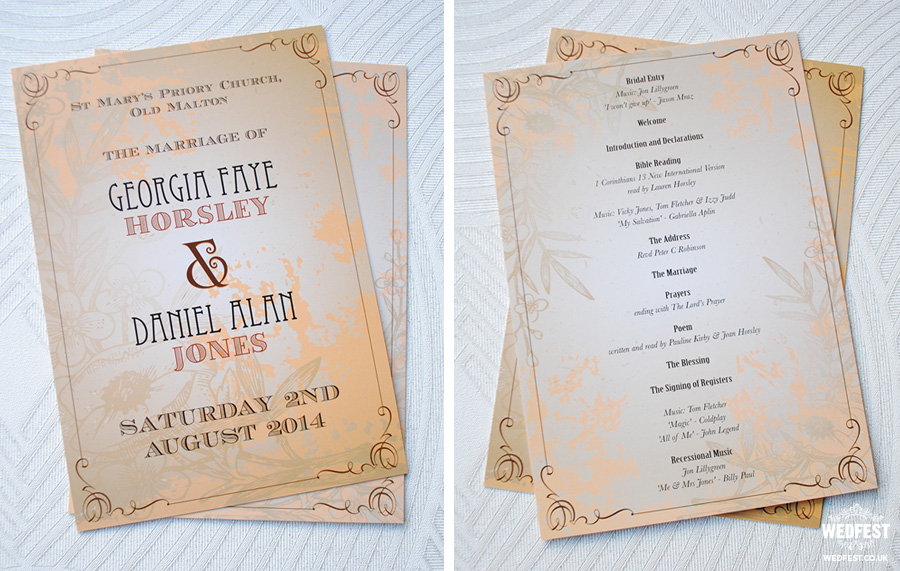 For the wedding day itself we designed the couple order of service cards for their wedding ceremony at St. Mary’s Priory Church which featured details of the prayers and music at the wedding which included music from Tom Fletcher and singing from Danny’s Sister Vicky Jones who was previously on the hit show The Voice.

For the wedding reception we made the couples wedding menus which again followed the same theme of vintage design that was used in all of the wedding stationery. 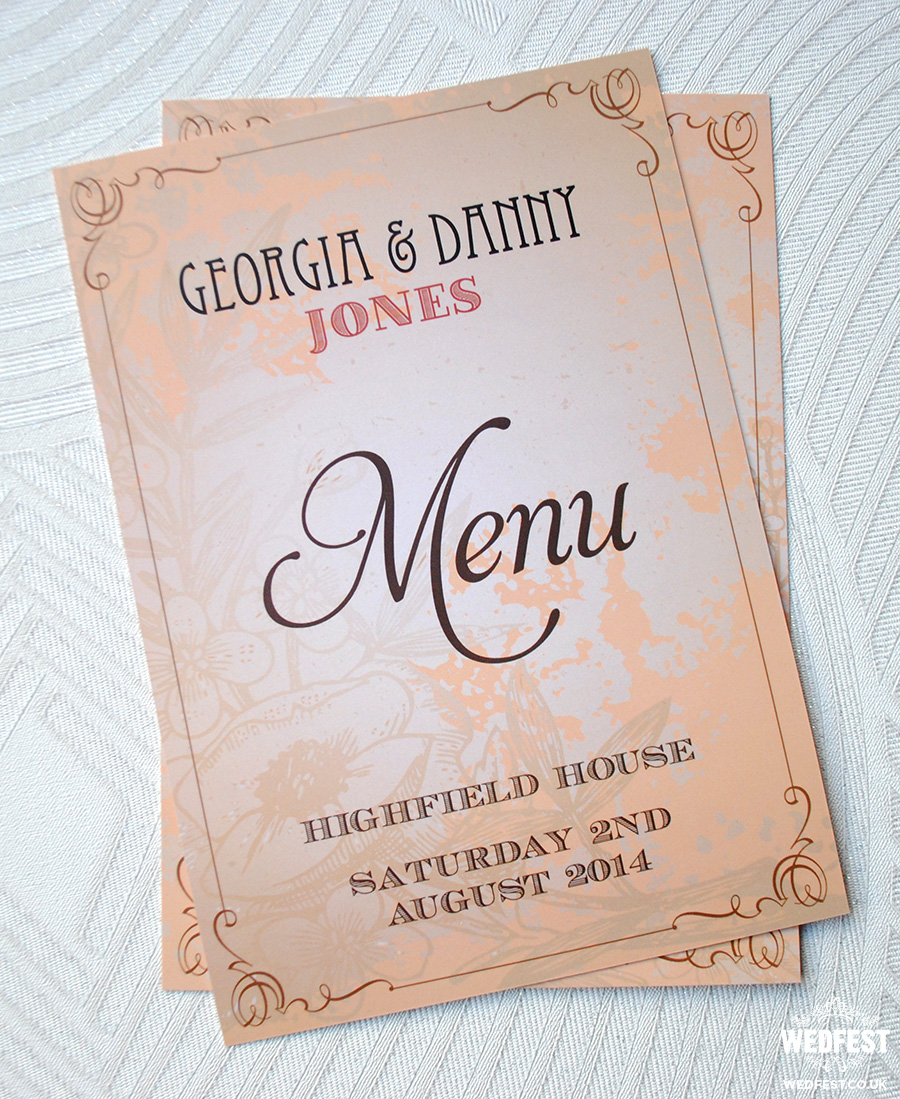 The wedding was exclusively photographed by Hello! Magazine and Danny & Georgia featured on the cover of Hello! in August. Georgia of course made a beautiful bride and Danny looked pretty cool too! Its kind of easy when you’re a model and a rock star!! 🙂 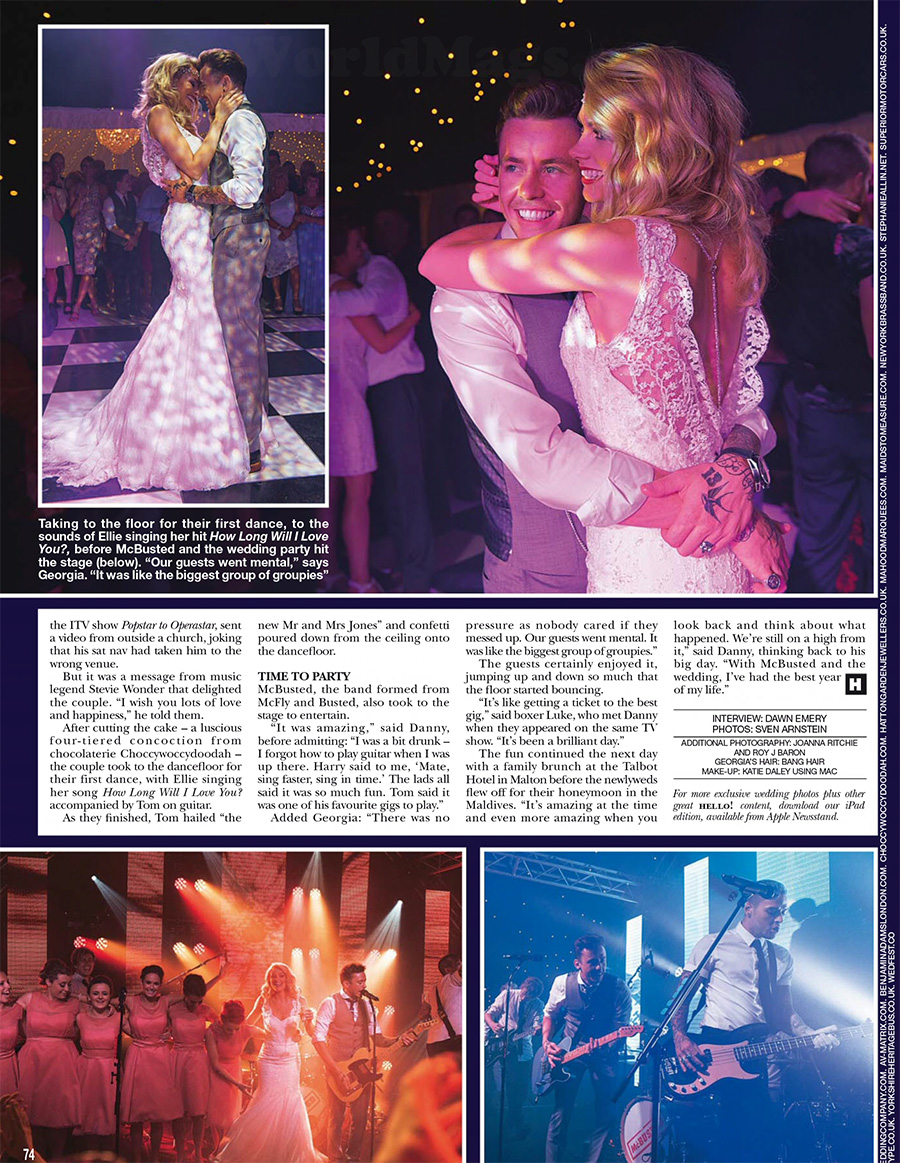 You can see by the photos what a wonderful day they looked to have and Danny and the boys even rocked out a few tunes at the end of the night and why would you not if you were one of the biggest pop bands in the world! I did consider singing a few songs at the end of my own wedding but why would I have ruined everyones day by hurting their ears! I’ll leave it to the pros. But seriously how cool is that! Who was your wedding band?, “Ahmm McBusted!” and who sang to during your first Dance? “Ellie Goulding”!! Come on! that is as rock and roll as it gets! We went to see Ellie perform a few days after this wedding in Ibiza and that was unreal so I can only imagine how cool it would be to have her sing at your wedding day! 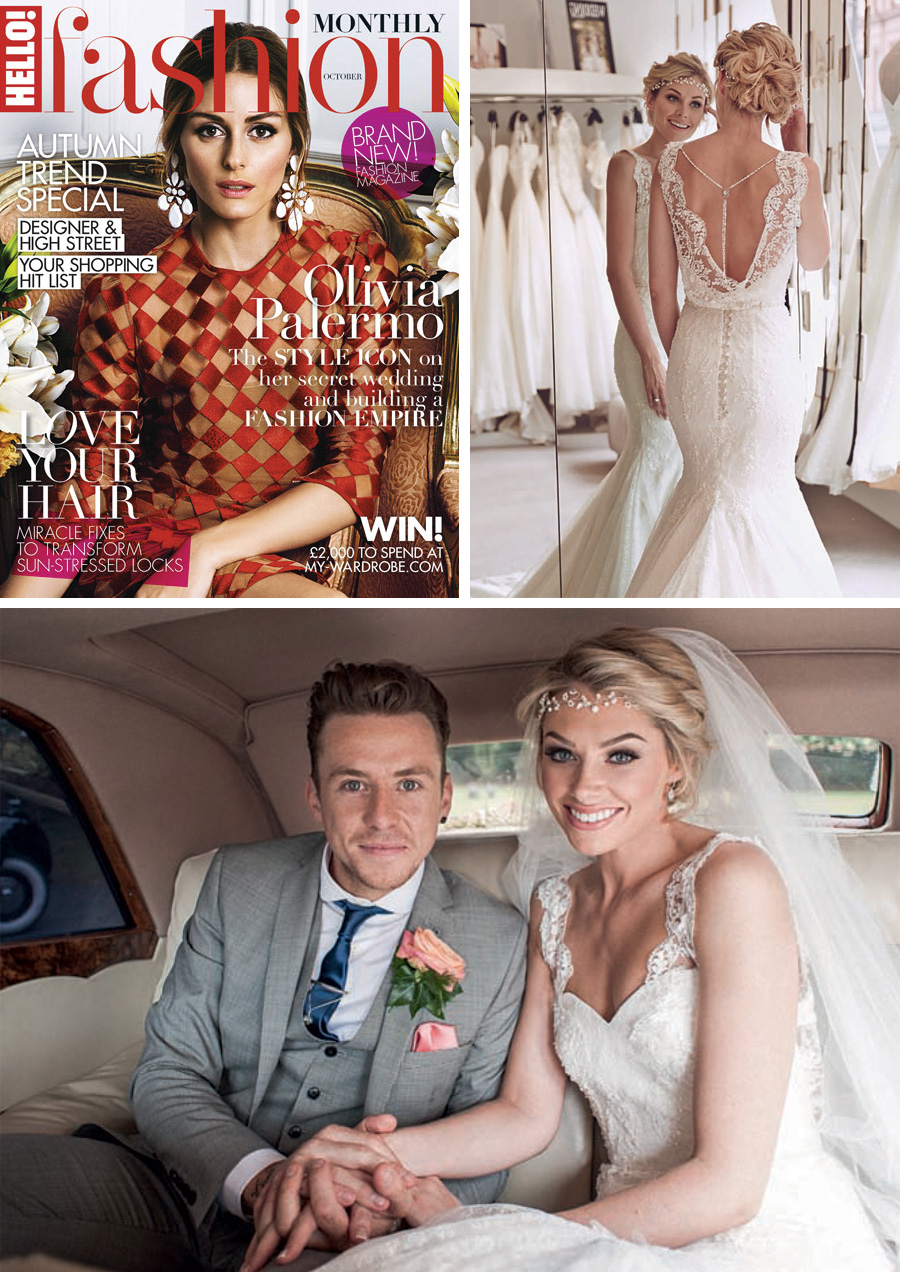 The wedding was also featured in Hello! magazines new publication Hello! Fashion Monthly and they went into a bit more detail on the details of the wedding day and the weddinf suppliers which of course included ourselves Wedfest, and all of the amazing companies that brought this beautiful wedding together. 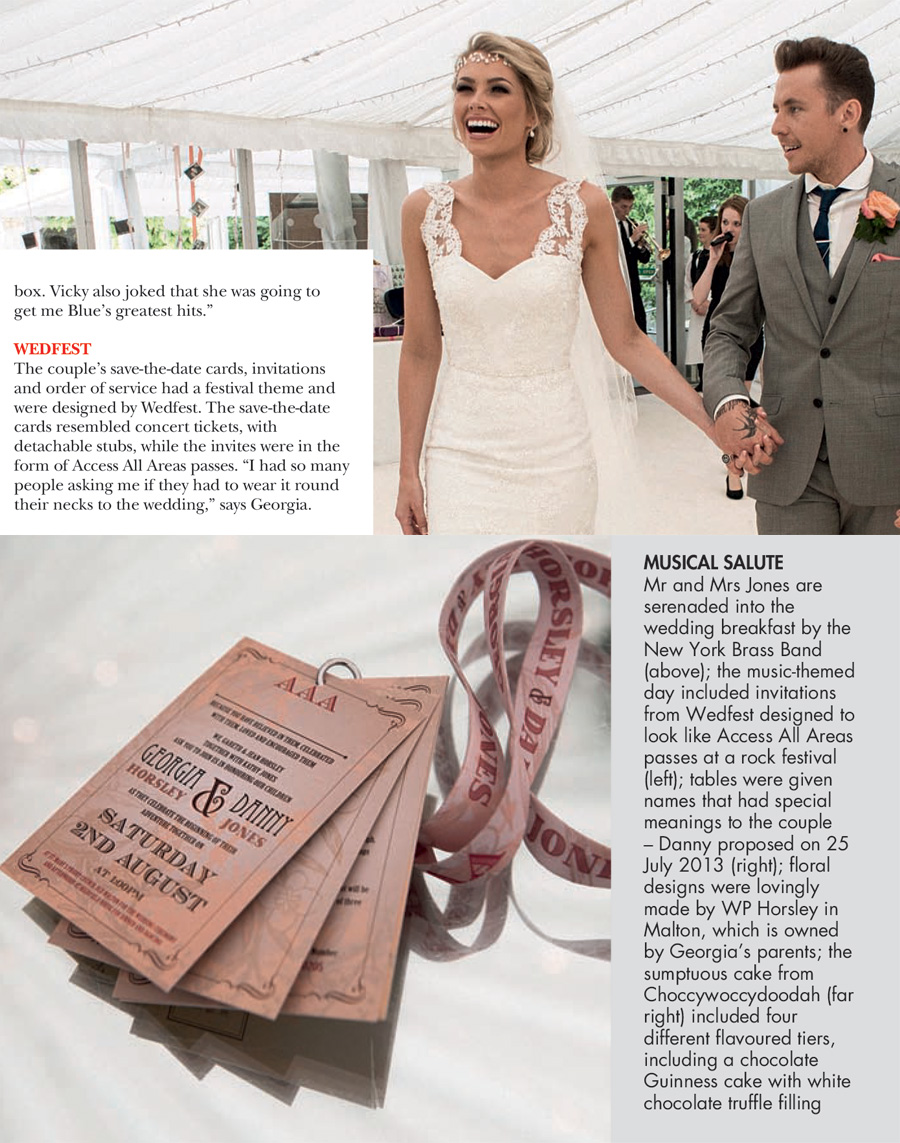 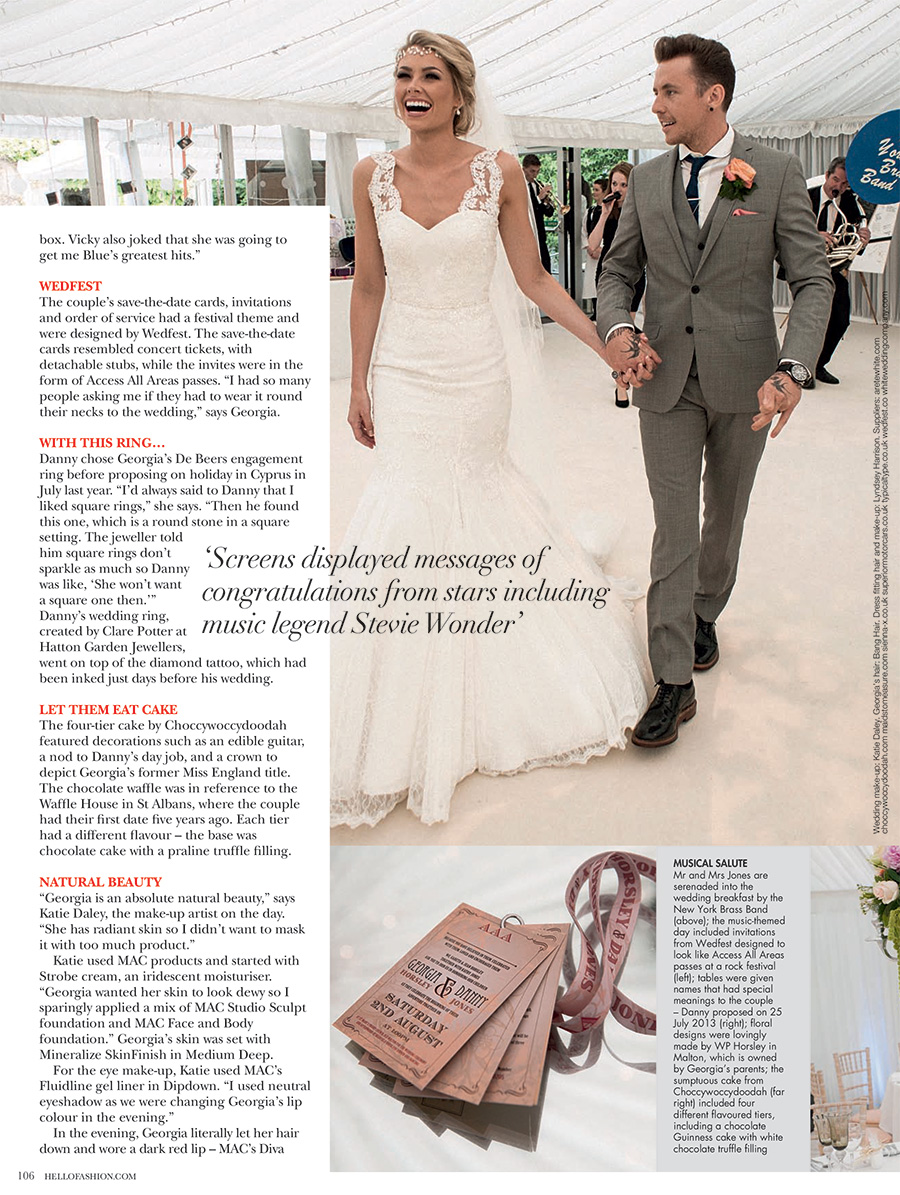 It was a pleasure to work with Georgia and Danny on their beautiful wedding stationery and we wish them every luck and happiness for their marriage. 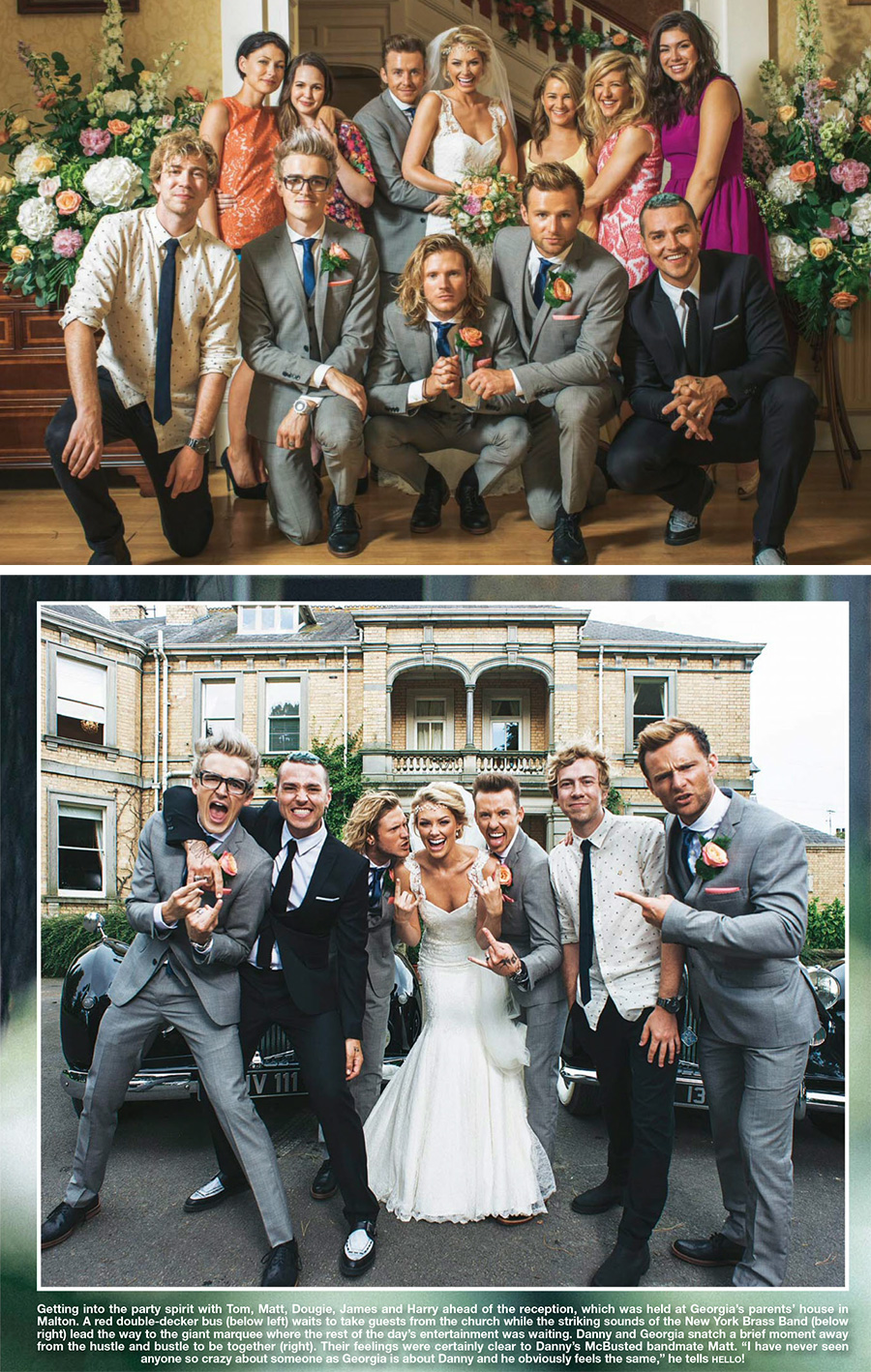 If you like the look of the wedding stationery you have seen here or just want more information on any of the stationery we make here at Wedfest please click here to get in touch.