Last week we were on our annual jaunt to Electric Picnic festival in Ireland and met lots of old friends and lots of new ones. Many of these people we met at the festival over the years we have ended up designing their wedding invitations and wedding stationery, and many of the people we met this year we are going to be designing their wedding invitations in the future. Of course many of these people have had or are planning to have festival weddings in Ireland. Which got us thinking back to  a lot of the Irish weddings we have worked on this year and previous and thought we should share a few images of some Irish Festival Wedding Invitations we have worked on lately. Of course these invitations can be adapted to suit any area or country but for the purposes of this post all these invitations were for couples from Ireland and for their Irish Festival Weddings…

Of course like all the invitations we design there is a real mixed bag of designs here, from all out festival themed wedding invitations to more rock n roll themed designs, vintage designs and things in between… 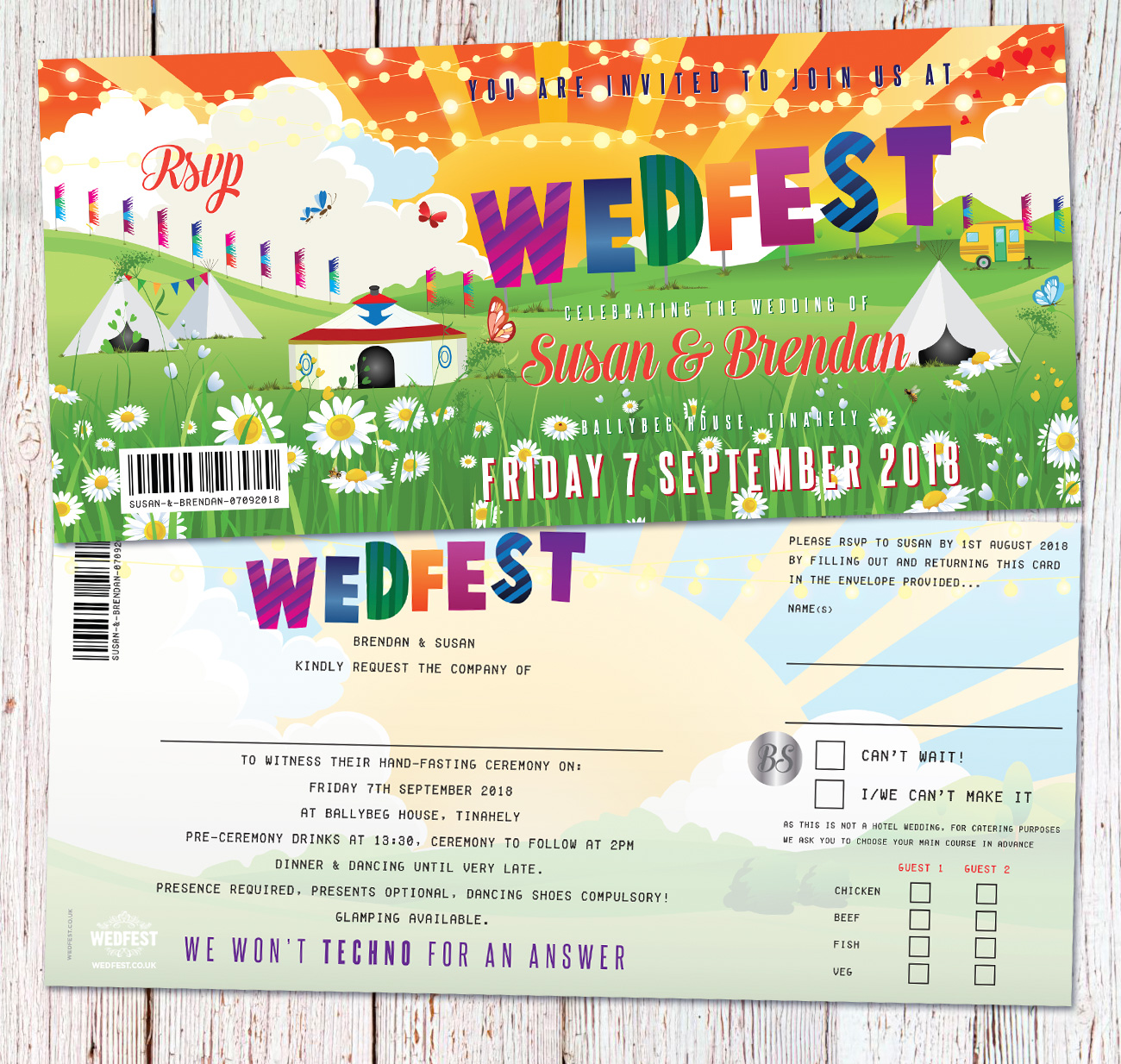 This first one you see was for Susan & Brendan who got married at Ballybeg House, Tinahely, Ireland. For their festival themed wedding invitations Susan wanted the word WEDFEST in huge letters like they are on stilts, much the same way you see at most festivals these days and most famously at the top of the Glastonbury festival looking down over the festival. The couple also wanted the inclusion of festival Glamping elements such as tipi tents, yurt tents, caravans and tents as Glamping was available at their wedding venue. This was a super cool wedding invite and perfect for a Festival Wedfest in Ireland. 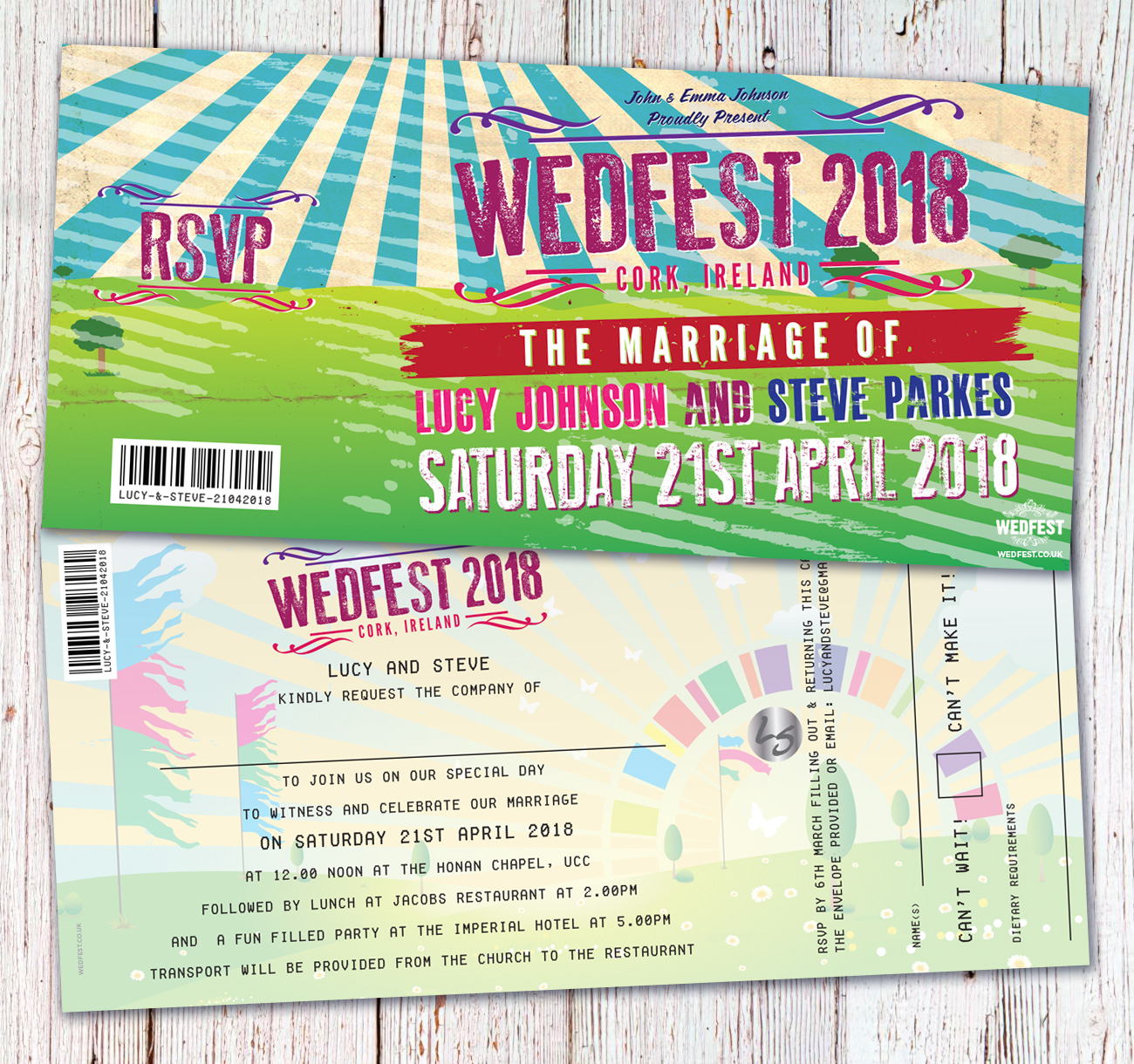 Lucy & Steve’s Irish Festival themed wedding took place in Cork, Ireland over a number of venues throughout the day. For their Irish Wedfest Invitations they opted for our Classic Wedfest design which has been loved by many festival wedding planners over the years and always has remained a firm favourite wedding invitation design for festival weddings. 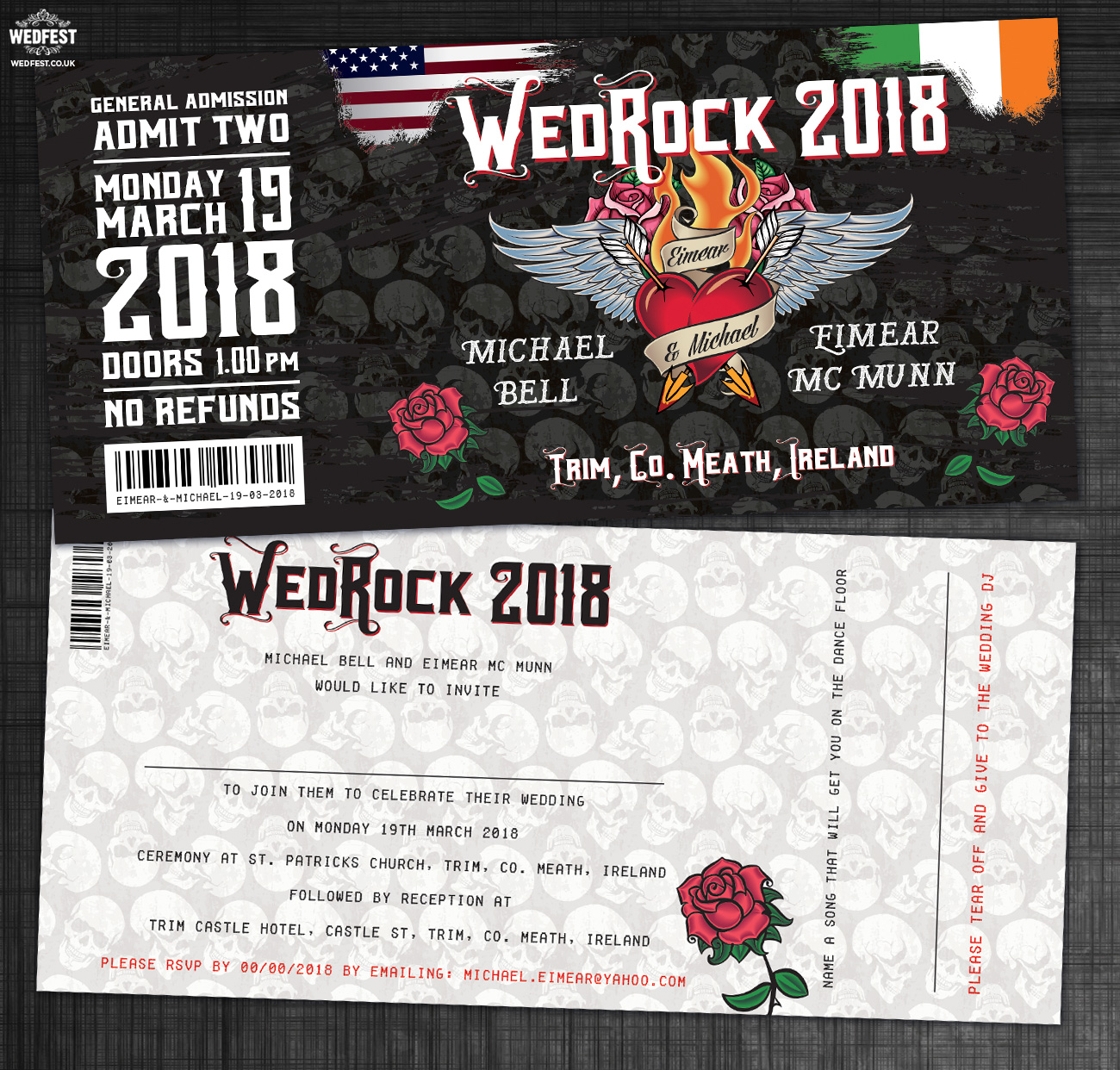 Michael and Eimear went the Rock n Roll Wedding route for their Wedrock Wedding in  Meath, Ireland. Michael is from the USA and Eimear is an Irish bride so they wanted a nod to their both countries on this rock n roll wedding invitation design which we did by adding snippets of the flags of both countries. This is an awesome wedding invitation design and perfect for any couple who are having a rock themed wedding. 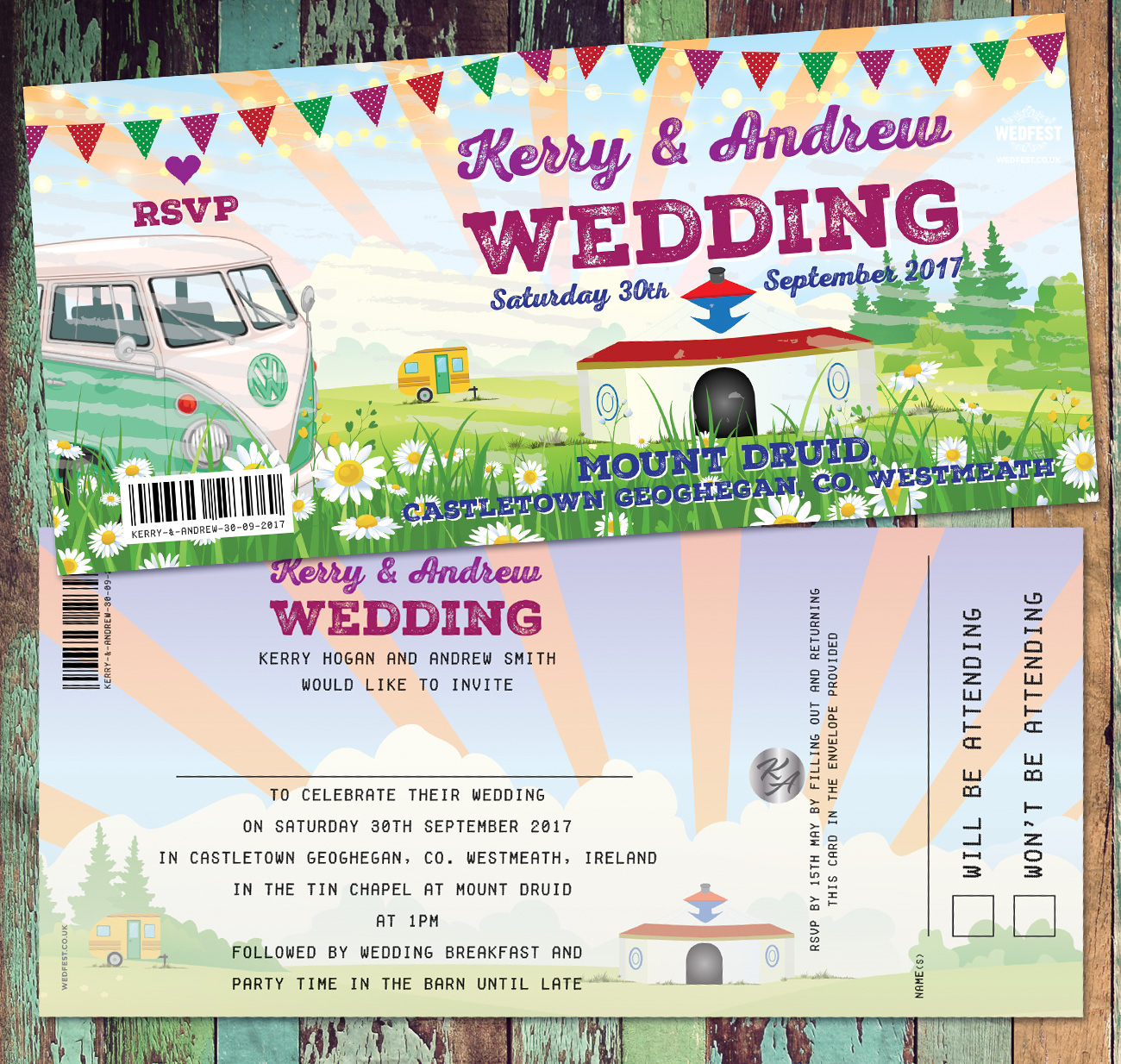 We have featured wedding invitations for festival weddings at Mount Druid on our website before as it is a very popular place for couples to get married in Ireland, especially those planning festival themed weddings in Ireland. Kerry and Andrew are one such couple and this festival themed wedding invitation was perfect for their mount druid wedfest, featuring a VW Camper, a Caravan and Mongolian Yurt tent, all of which can be found at the Mount Druid venue in Castletown, Westmeath. 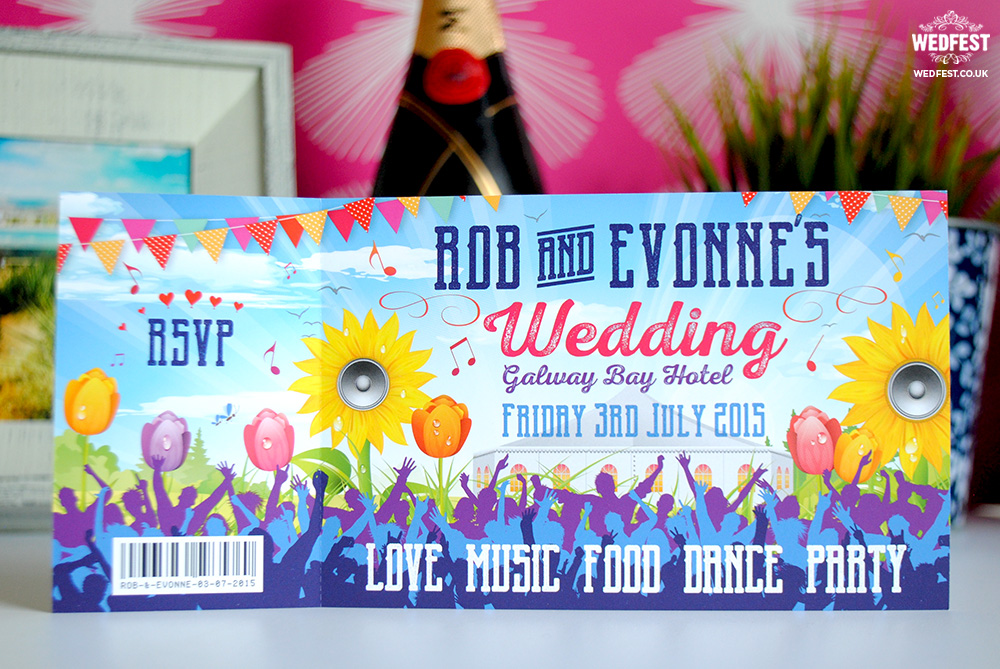 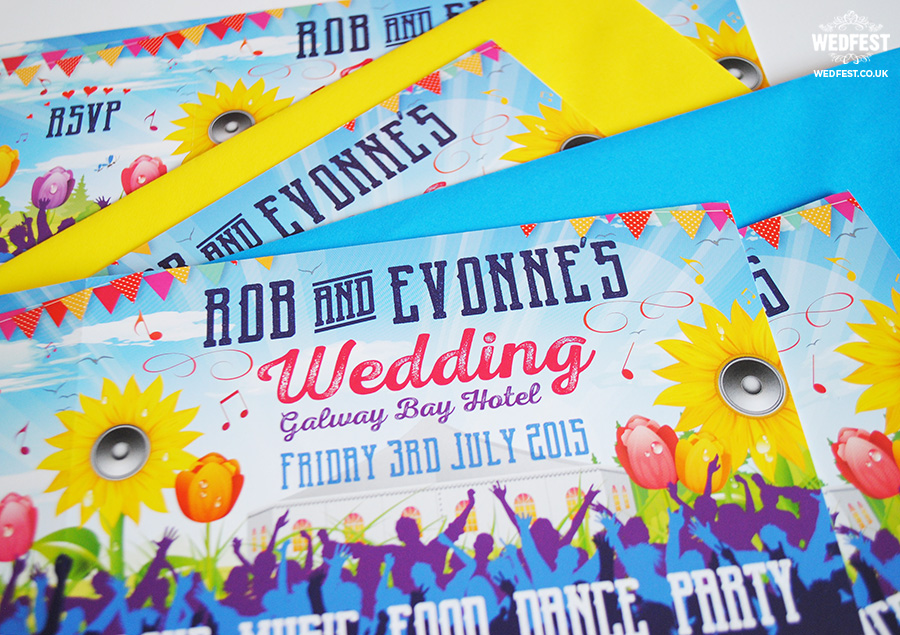 Ticket Invites for  a Galway Wedding 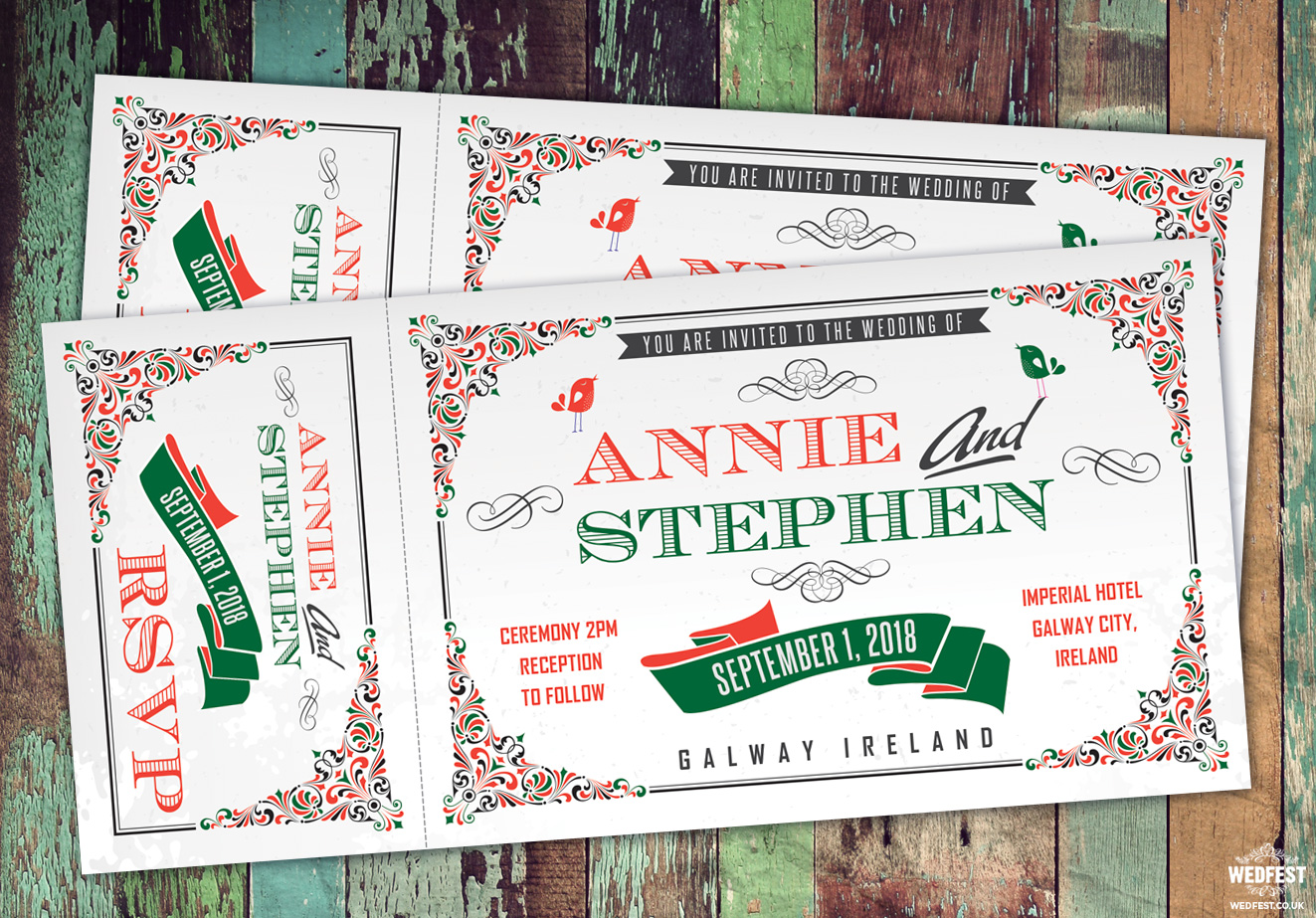 Annie and Stephen weren’t having a full on festival wedding but did like the idea of having ticket style wedding invites for their wedding at the Imperial Hotel in Galway, Ireland. This is a really beautiful design with hints of Celtic design and a colour scheme that is undoubtably as Irish as it gets! 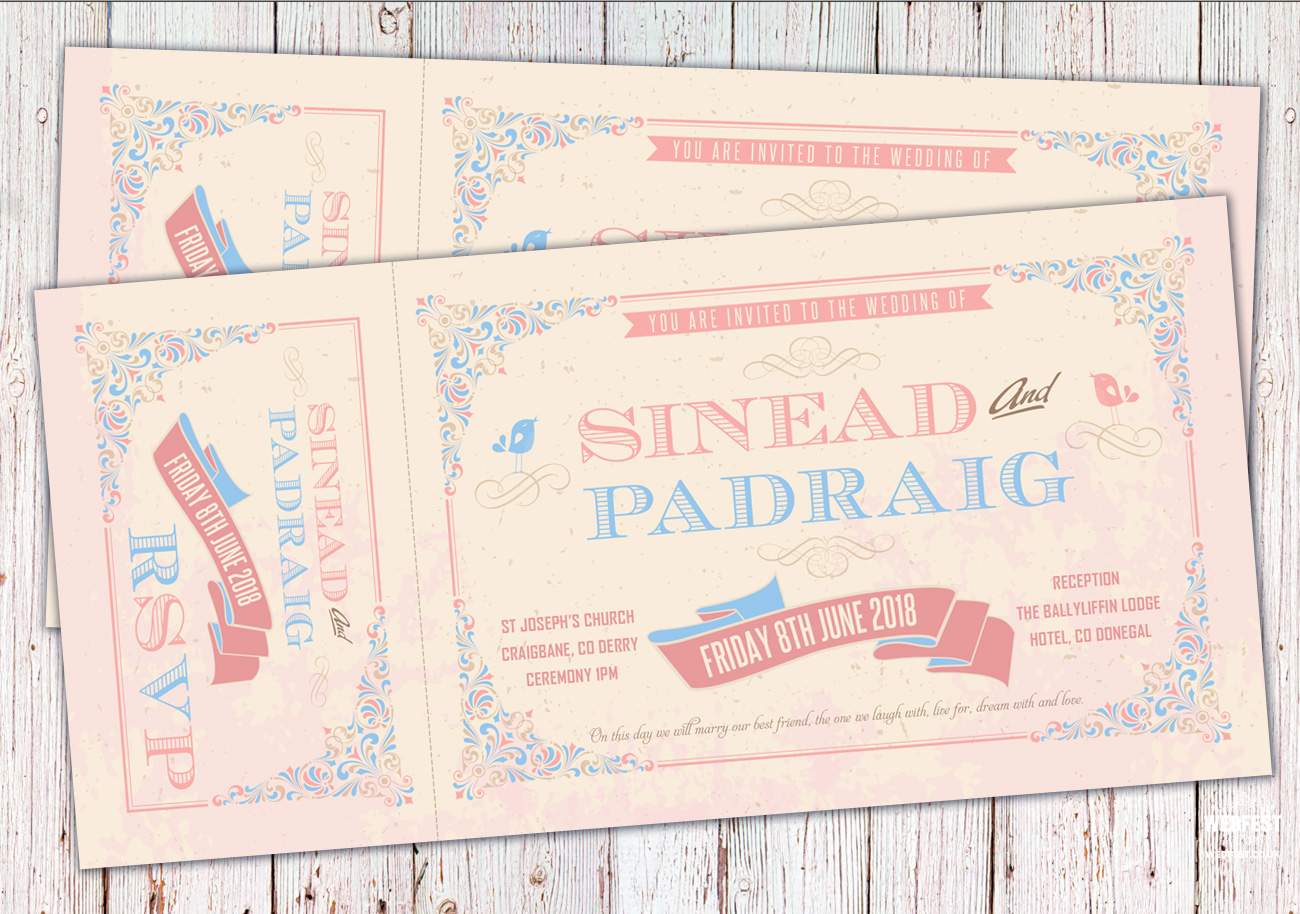 This design is the same as the one above but with more a vintage ticket colour scheme for Sinead and Padraig’s wedding at the Ballyliffin Lodge in Donegal. 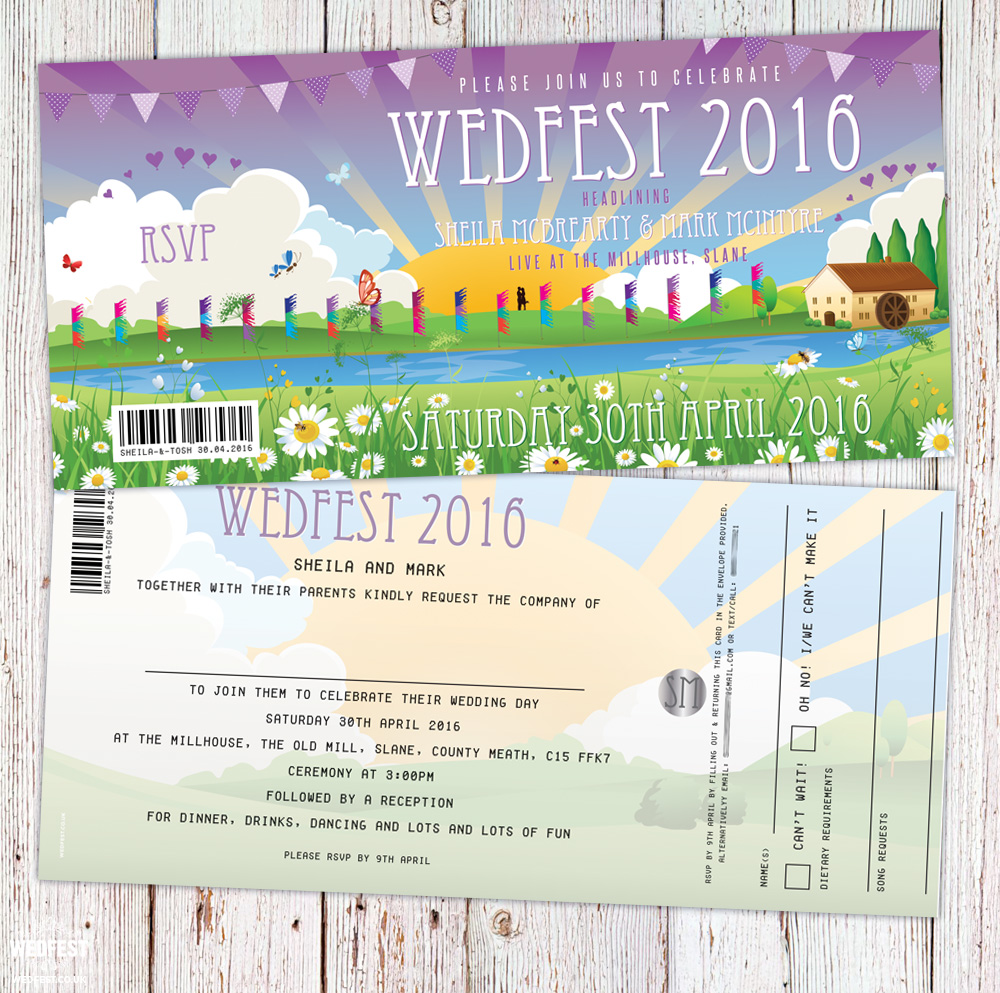 One of the couples we met the first time we went to Electric Picnic festival was Shiela & Mark. Fast forward a few years and we are still meeting this awesome couple each year, and a few years ago we designed all of their wedding stationery for their festival wedding in Slane, Ireland, which included these beautiful Wedfest Ireland Festival Wedding Invitations. 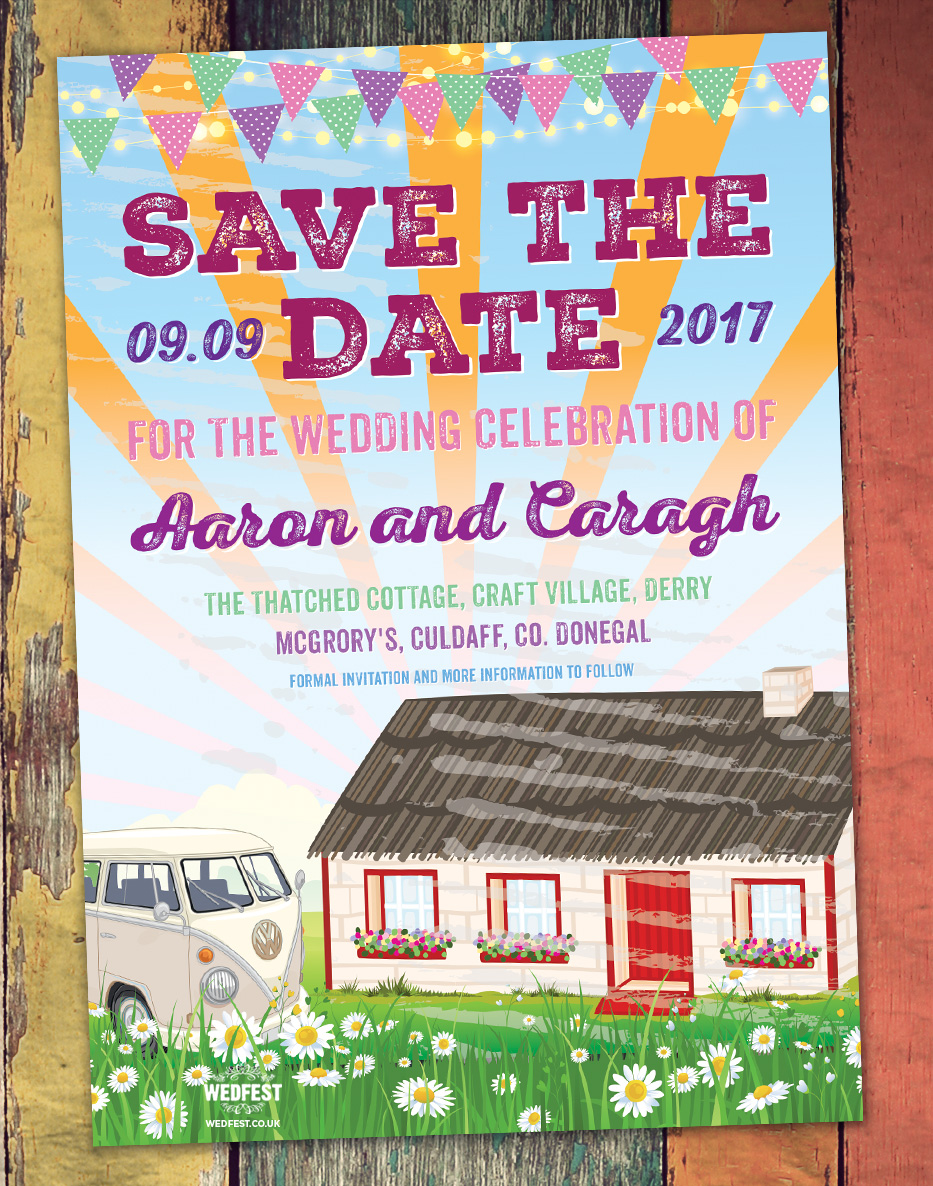 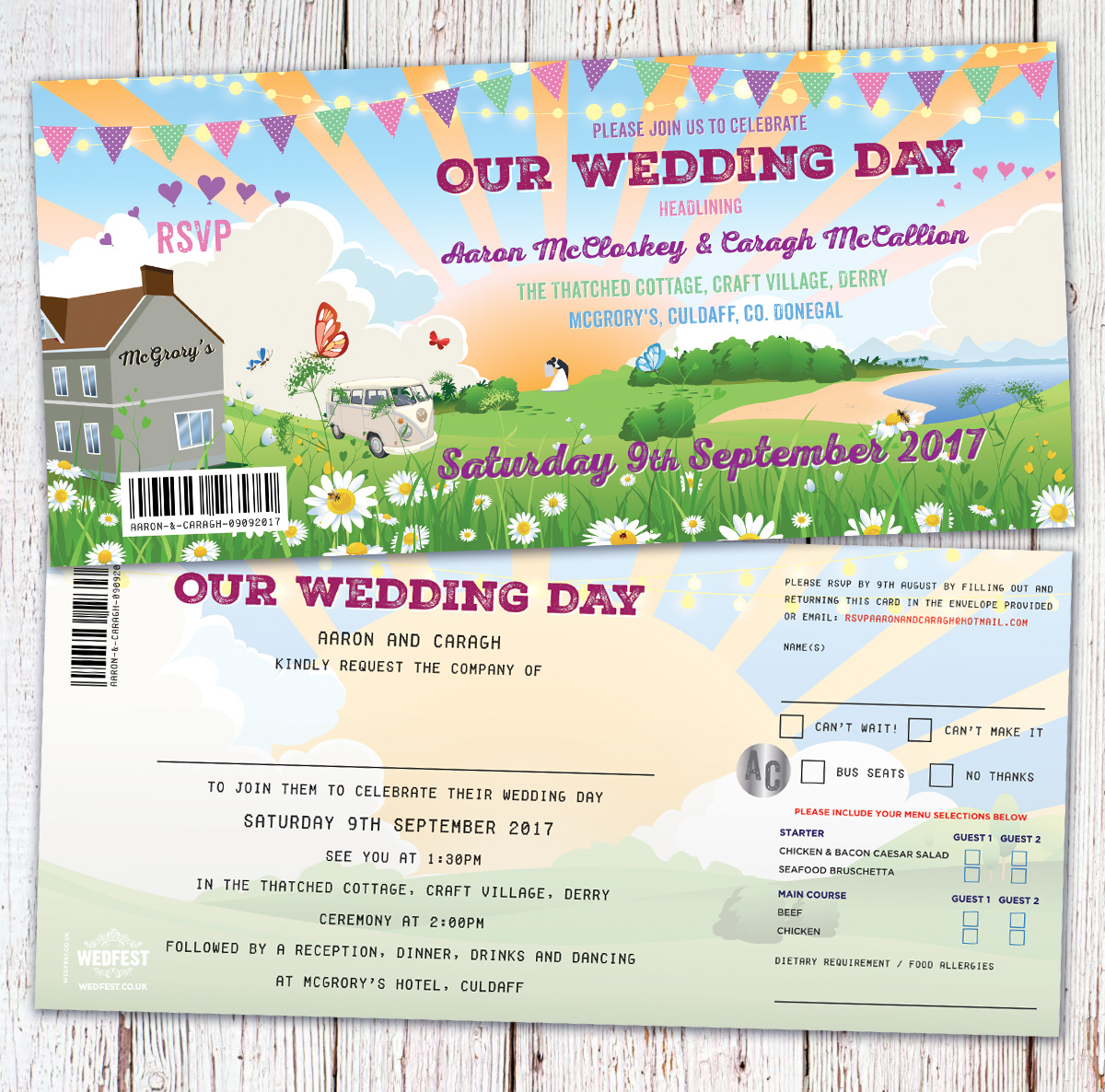 So there you have a small selection of some of the Irish Festival Weddings we have worked on lately. There is alot lot more and we will try to bring them to you over time, but hopefully this gives you all a flavour of whats possible regarding your wedding invitations… 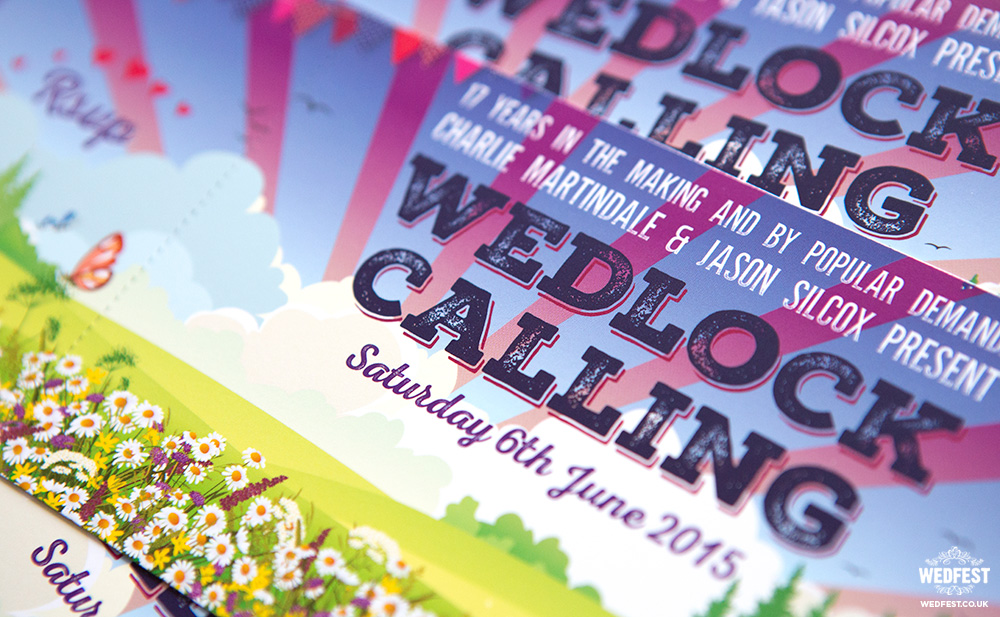