Rock n Roll San Francisco themed Wedding Invites – Jacqueline and Sean from San Francisco, California got hitched at the weekend and Wedfest provided them with these awesome Rock n Roll Wedding invites for their big day. The couple got married at The Omni Hotel, San Francisco and then had their wedding reception at The Hard Rock Cafe at Pier 39, San Fran. 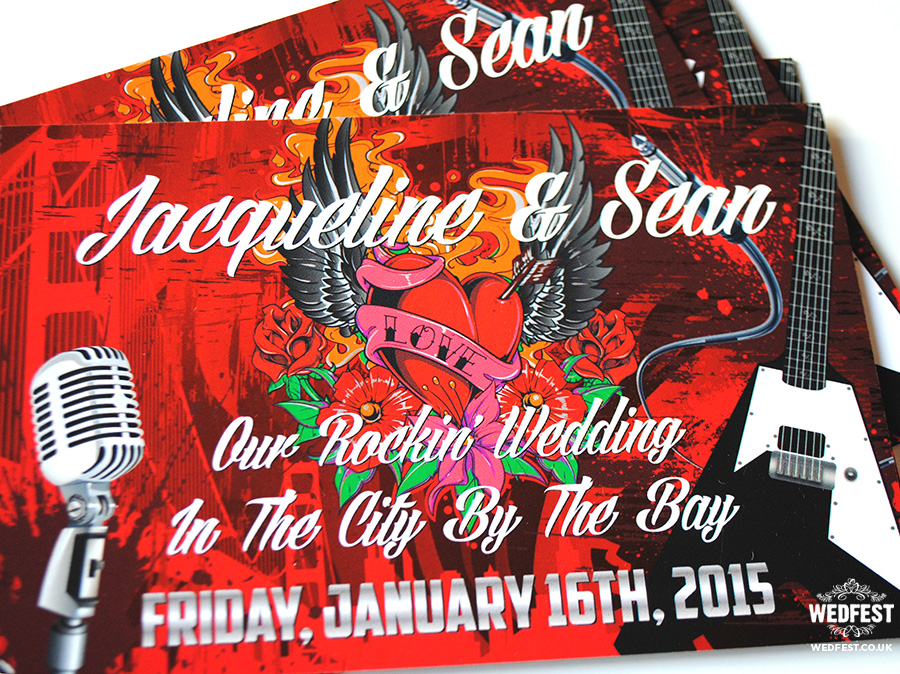 Jacqueline got in touch last summer looking for us to create them some original and cool wedding invitations. She told us that she wanted them to feel really rock n roll and a few of the ideas she mentioned were to feature a tattoo style image, images of roses, feature instruments such as drums and a guitar as the two of them play drums and guitar in bands and maybe some kind of image to represent their city of San Francisco. She also said that she wanted on the front of the wedding invite the phrase ‘Our Rockin’ Wedding in the City by the Bay’. No problem!!! 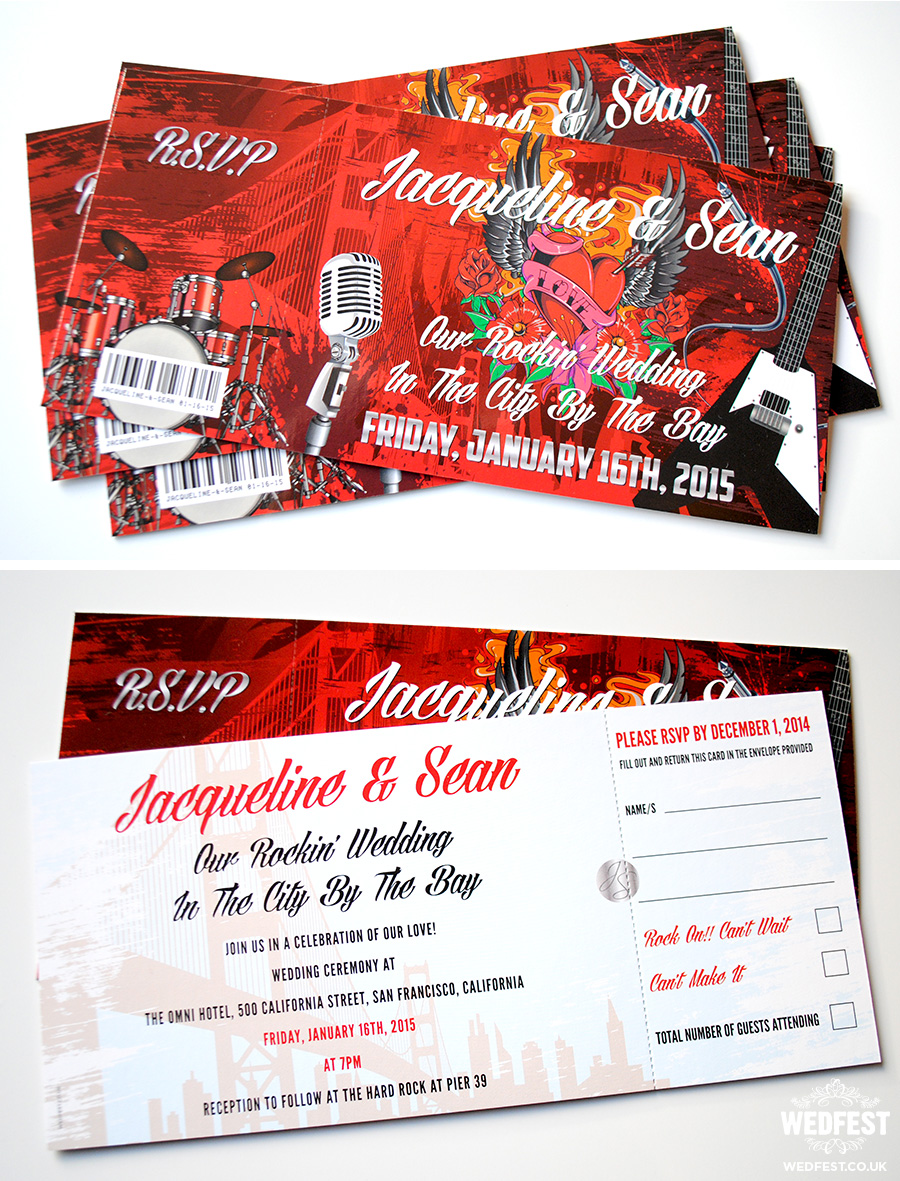 The first thing that sprung to mind was to have the names of the couple in the style of a tattoo or in a tattoo style font and maybe have this overlap with the City by the Bay line. We used a really rock and roll style image of a heart with wings and flames coming out of it surrounded by roses and flowers and used this as the centre piece of the invite and had the names and the statement above and below this. The invite also featured the image of a guitar and guitar jack, a set of drums and an old school microphone. 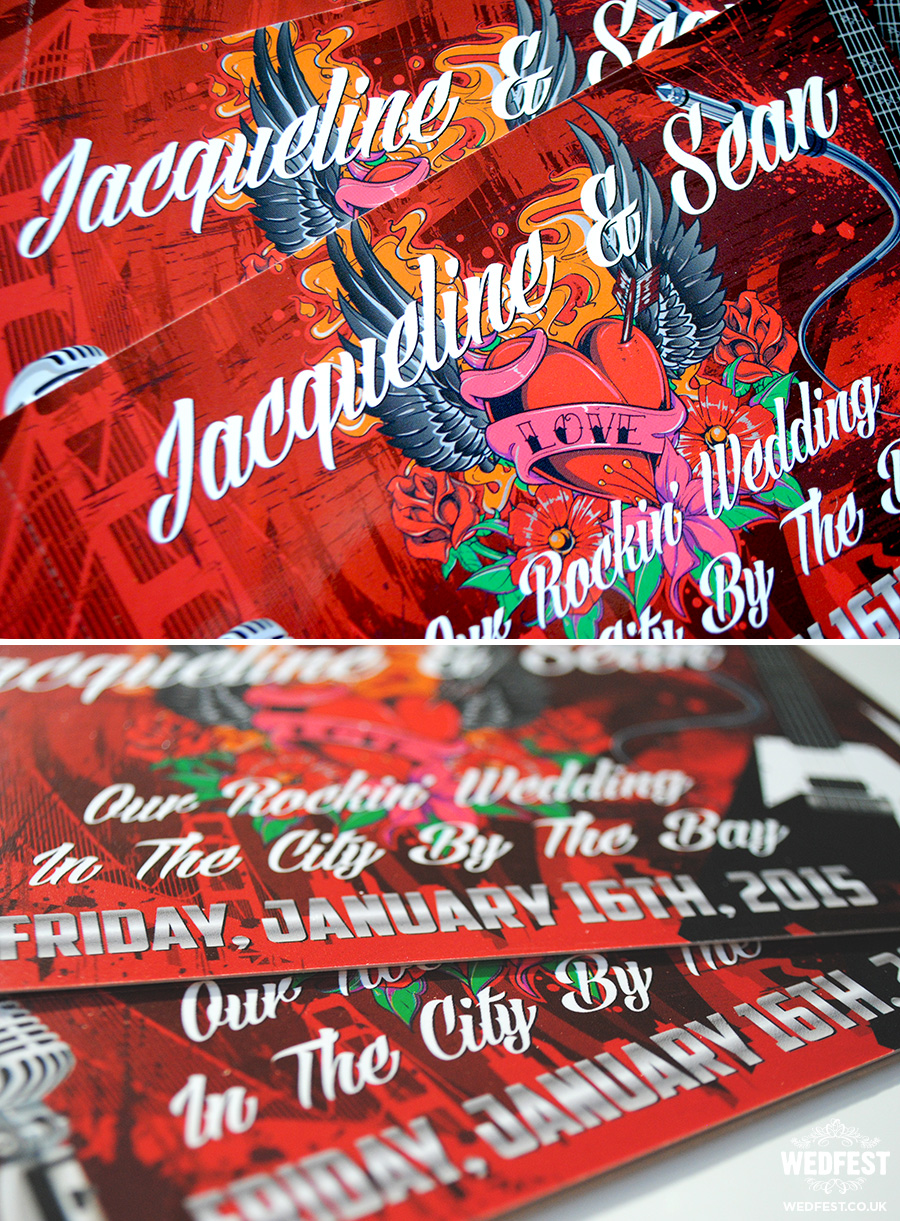 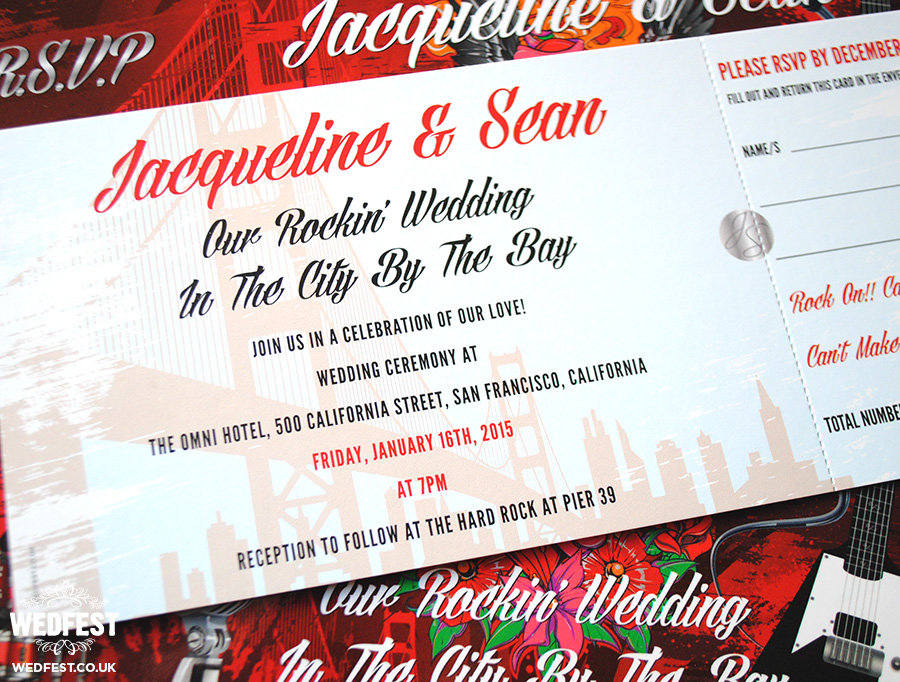 As the couple play in bands themselves they wanted the wedding invites to be like gig tickets so we made them ticket wedding invitations and the ticket stub served as the RSVP card which could be easily tore off and sent back to the couple in pre addressed RSVP envelopes.

These were very fun wedding invitations to work on and the results were amazing, we think you will agree that these invitations are amazing to look at and capture the Rock n Roll vibe that the couple wanted to achieve.

If you like the look of these Rock n Roll Wedding Invites and would like to order some rock and roll wedding invitations for your own wedding, or alternatively if you are having a themed wedding or just want to feature a particular city in your wedding invites or wedding stationery then please click here to get in touch and see what Wedfest can do for you.